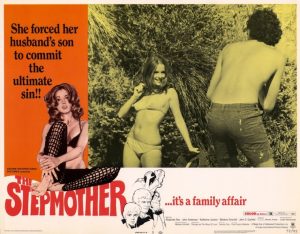 I like weird 70’s movies a lot, but this is weird even by weird 70’s standards. It takes about half the movie, for instance, to even figure out why it’s CALLED “The Stepmother”–it, at first, seems to be a movie about a jealous middle-aged, Mexican-American architect who murders a business associate after he finds him in bed with his younger gringa wife (and unbeknownst to the wife). By a weird coincidence another more lower-class Mexican also murders his wife in the same area and is framed for both murders. But the cops begins to suspect the architect, and his continuing jealously causes him to accidentally kill his partner and best friend (played by “MASH’s” Larry Linville). He then has to fend off the amorous advances of the friend’s widow before the cops grow even more suspicious. Got all that so far?

So why is it called “The Stepmother”? Well, about halfway through the man’s son shows up from Mexico City, and he also starts messing around with the young wife (his stepmother)and the off-kilter plot REALLY goes into over-drive.

There are a few reasons to see this. First, if you’re a weird 70’s film completist. This film is kind similar to early 70’s bizarro flick “Swinger’s Massacre”, which was equally ridiculous but had a less random plot. Second, if you’re a fan of Larry Linville, he’s actually pretty good here and acts circles around the rest of the unknown cast. The best reason perhaps though is this was the first appearance of cult drive-in queen Claudia Jennings. Jennings has a cameo role as a stoned-out hippie chick who has one hilarious line where she tell the cops she was “way too ripped” to remember what happened the night of the murder. (And if that isn’t worth the price of admission, she also has her typically gratuitous full-frontal nude scene). Weird, weird movie, but if any of this sounds interesting to you, check it out.