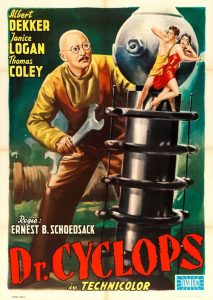 “Dr. Cyclops” was an unusual horror film for its time. It did not use any major stars and was shot in glorious technicolor (unheard of for a film of this type). The plot is a typical “B” movie plot but the special effects and the color photography are what really sets this film apart.

The story involves “Mad Scientist” Dr. Thorkel (Albert Dekker) who summons three scientists (Thomas Coley, Janice Logan, Charles Halton) to his remote South American laboratory to seek their advice on his secret project. Along the way they are forced to bring muleskinner (Victor Kilian) along.

It turns out that the evil doctor has discovered the secret of miniaturization. To prevent them from cashing in on his discovery Thorkel shrinks the three scientists, the muleskinner and nosey local Pedro (Frank Yaconelli) to miniscule size. The rest of the film chronicles their efforts to escape.

The real star of the film are its special effects. Accomplished through a combination of split-screen, rear projection, miniatures and over sized props, the effects are quite convincing for the time. One shot I thought was quite well done was a scene where the evil doctor picks up one of his victims in his hand.

Because most of the budget was spent on color and effects, the quality of the acting suffers. Dekker does OK as the title character (a name given him by his victims because of his failing eyesight). The others are just barely adequate. Veteran Paul Fix, who could have raised the acting up a level, appeared briefly in the opening reel as Thorkel’s sceptical assistant.