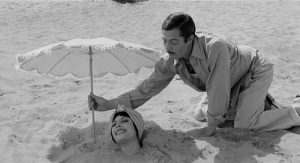 Partnerships come to an end for many reasons. The ending of these partnerships or divorce usually happens in several stages and is a result of a cascading series of events and lack of communication. Always there seems to be a downward spiral of increasing conflict and declining communication before the partnerships fails,
When partnerships fail, the parties lives change. Sometimes for better or sometimes the worse: It will always mean significant adjustments for either part. Usually this failure is accompanied by feelings of loneliness, failure and sadness. It is never fun.

The marriage between movie theatres and Hollywood is coming apart. Hollywood is being seduced by a younger newer form of movie delivery, video on demand. Right now the flirting between the studios and VOD is intensifying and any observer can see the studios are thinking of leaving the marriage and most likely they will tell the theatres they are going out for that proverbial jug of milk never to return.

There is a disconnect that is quickly becoming a chasm between the theatres and the studios. The relationship is being deeply strained for multiple reasons. Each side is beginning to play the never productive blame game. The theatres are telling Hollywood that there are just too many bad movies, including sequels, reboots and aging franchises that no one wanted to see. Some at the studio level point to rising ticket prices, which hit a record high in the second quarter. The studios also cite the exodus of the millennial base from movie going and also state out loud that movie theatres just do not offer enough the millennial and generation Z demographics. Whatever the reason the exhibition industry in North America saw it’s lowest box office in 25 years.

In response to that exodus, theatres are clamoring to put in luxury seating and to sell highly priced chicken fingers, which kind of th equivalent of a wife getting implants in order revitalize her marriage.

Many like me, worry that that the summer movies have simply lost their place as the top dog in America’s water cooler conversations. People are now talking about shows such as “Game of Thrones” and “The Handmaid’s Tale”. Game Of Thrones is being distributed by Warner Brothers and Handmaids Tale by MGM. I personally feel that this summer’s failing box office and the reasons behind the poor performance should be laid squarely at the feet of the studios. Their eye is no longer on the prize and they are being distracted by more shaplier markets.

The studios have simply stopped caring about the theatrical markets and have moved on in their minds to more greener pastures. They no longer see the theatres are singular markets worth serving, but only as accelerators for video on demand and foreign sales. The studios are now limiting theatrical releases to giant event films or tentpole movies are sadly relegating all other films to video on demand. In the pat years ,many studios felt that although some of the summers blockbusters might have stumbled in North America, the revenue would be made up for in foreign markets. Unfortunately for the studios that safety net seems to be coming apart are the seams The most recent “Transformers” movie grossed $228 million in China, nearly 30% less than the prior installment in the franchise. Disney/Pixar’s recently released “Cars 3” had a weak debut in the country, where overall ticket sales have cooled. The Chinese market is now turning to homegrown product. As the Chinese box office sagged deeply last year the movie business in China realized they could not trust Hollywood for sustainable product and began searching for answers. Many concluded that bigger Chinese properties were the solution and banked on new, higher-quality franchises that were totally of Chinese origin.
Enter Wolf Warrior 2

Since its July 27 debut in China, the action thriller blew up to become a box office miracle. In less than two days, it surpassed the $88 million scored by the franchise’s first installment in 2015. Ten days later, it overtook last year’s sensation, “The Mermaid,” as China’s top-grossing film of all time. Now, its $810 million take after just five weekends has made “Wolf Warrior II” the second-highest-earning title in a single territory in history, behind “Star Wars: The Force Awakens” in North America. Hollywood is not happy.

This trends is being seen in many other territories. They are ceasing to rely on Hollywood and are insisting on becoming masters of their own cinematic destiny. Hint Hint.

There is no doubt that the relationship between theatres and Hollywood has soured deeply. Hollywood must begin working on atoning for it’s neglect of the theatrical market by providing proper release windows and consultation with theatres owners on the product they want to see in their theatres. If Hollywood refuses to do this then, which at this point I think is likely then theatres should acknowledge it’s need to re-invent themselves.

In my vision I can easily see theatres bringing in a multi-sourced programming scheme. Using a combination of classic movies on a fixed schedule, to showing UFC fights and other sporting events to attracting gen Z and millennial audiences by incorporating live and global gaming tournaments. Theatres owners should realize that the largest group of motion picture producers are not the major studios but are the member of the International Film and Television Alliance, the IFTA. Every years it’s members produce and or distribute close to one thousand films. I am and more than sure that within their portfolios 60-70 titles would be worthy of theatrical distribution.

At the end of the day there is nothing better that the collective and communal enjoyment of a movie. Theatres still have a huge amount offer to both their community and to Hollywood. It is that theatres really reflect on and get re-acquainted wig their own worth. Sometimes one of the first victims of an abusive relationships is your own self concept.

Ideally I want to see this 100 year old marriage between Hollywood and the theatres be sustained, but if not…and if Hollywood goes out for that jug of milk…there are many options.