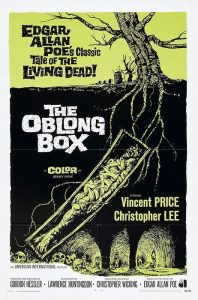 In the end of the Nineteenth Century, the aristocrat Edward Markham (Alister Williamson) is disfigured by sorcery in Africa by the natives. His brother Julian Markham (Vincent Price) brings him back to the Markham Manor in England and keeps him prisoner in the attic. The mad Edward asks his lawyer Trench (Peter Arne) and his partner to bring the African sorcerer N’Galo (Harry Baird) in secret to heal him but Julian does not allow any contact with his brother. Trench and N’Galo simulate the death of Edward to remove him from the attic in a coffin. However, body snatchers bring his body to the unscrupulous Dr. Newhartt (Christopher Lee) for his research. Edward offers a large amount to Dr. Newhartt to stay hidden in his house and wears a crimson hood to hide his face. When Edward goes to the town, his mask brings problem to him and he begins a series of murders. When he finally meets N’Galo, he finds why the natives have deformed him and he seeks revenge.

“The Oblong Box” is a dark horror movie based on a story by Edgar Allan Poe. The screenplay keeps the story interesting until the end and the cast has two icons of the genre – Vincent Price and Christopher Lee. The sets and the atmosphere are stylish and adequate for the story.