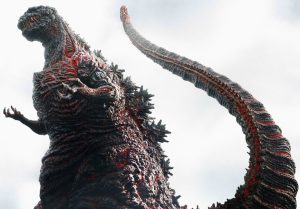 Review by Abby Braunsdorf
When I tell people here in the US that the Japanese have made a new Godzilla movie, they invariably ask “How are the effects?” I find that curious because, as a dedicated student of Godzilla movies, I can tell you that was never really a problem with them. My question would be what is the non-Godzilla story?

Throughout the history of Godzilla, the following elements have been essential to the plot of the films: mad scientists, gangsters, terrorists, aliens, time travellers, spies, school bullies, and kidnappers. And that’s just the tip of the iceberg. Sometimes these elements were just spices in a stew. Other times they reflected the times.

The new film, originally titled “Shin Godzilla” and marketed internationally as “Godzilla: Resurgence” is very much a product of its time. Taking a cue from the Fukushima Daiichi nuclear disaster, the story is told from inside the government bureaucracy as Japan faces a disaster reminiscent of, but potentially far worse than, a tsunami or an earthquake.

Unlike every other installment since the original, this is not a sequel to Godzilla (1954), so the country is completely surprised and unprepared when a strange creature wreaks havoc on the Aqua-Line bridge and tunnel. This creature evolves through several forms until it becomes a familiar-looking version of the Big G. This one is explicitly radioactive and virtually indestructible by conventional weaponry.

But the monster itself isn’t the first problem on many of the characters’ minds. Even- or maybe especially- in a time of crisis, politicians are still politicians. General agreement on goals doesn’t mean there won’t be dispute over solutions, or the procedure to carry them out, And when the US and UN get involved, things get more complicated.

While the humans try to find a way to stop Godzilla, it goes on a rampage reminiscent of the original film. Yes, now it’s rendered with modern computer graphics instead of miniatures. One of the creature’s developmental forms is cute and looks a bit rubbery, I’m guessing as an homage to some of the suits of old, but by the time it matures, it looks as fierce and craggy as you’d hope.

I like the often satirical look behind the curtain of Japanese politics and the new approach to introducing the creature. Like the original and the 1985 movie, Godzilla’s flying solo so there’s no monster-on-monster action to spice things up, but I’m sure we’ll have time for that in a sequel.

While the specifics of Godzilla itself are fantastic pseudo-science, the rest of the story is about as grounded in reality as any giant monster movie ever has been. There are no aliens or time travellers here. Not even terrorists or gangsters. Just the machinations of big government trying to stop a really big monster.