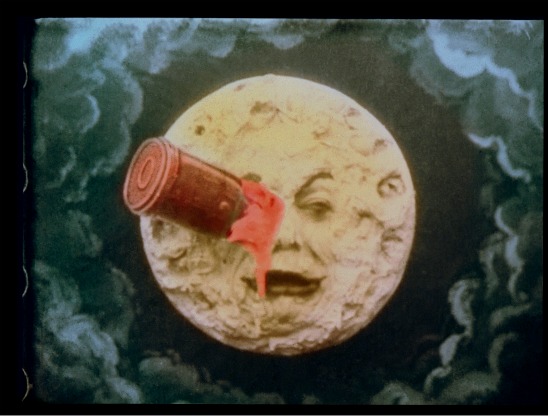 A Trip to the Moon was made by Georges Méliès in 1902 (just seven years after the Lumiere Brothers introduced the movies in Paris in 1895), and it was really the first real masterpiece of the young art of the cinema. It’s also a movie I love, and I’m not alone. Méliès’ Trip was a scintillating gem of film fantasy and science fiction, of ingenious special effects and playful wit, and it struck right into the hearts and minds of its first astonished audiences — penetrating their imaginations just as violently and memorably as moviemaker Georges Méliès’ rocket ship crashes into the eye of a startled man in the moon in the opening minutes of Méliès’ kooky classic: one of the best known images in all of cinema.

Méliès, a magician and theatrical impresario-creator who had been making little films, eventually in his own studio, since 1896, was inspired by the fictional lunar voyages of Jules Verne (From the Earth to the Moon) and H. G. Wells (The First Men in the Moon), and, his results were equally popular and entrancing. Like Avatar in our day, and like Star Wars in another (and like 2001: A Space Odyssey in another still) Méliès’ Trip took us on a joyride into outer space that dissolved the boundaries of space and time — and of plausibility and disbelief as well. Like crooner Frank Sinatra in his own classic ride, this remarkable little movie flies us to the moon and lets us play among the stars. (In other words…)

Méliès’ great little show was first released in the black-and-white prints most of us know, but also in an original hand-tinted color version that was missing for nearly a century. But that second version, discovered in a Spanish film library in 1995, has now been definitively restored — in colors as radiant and luscious as ice cream melting in a silver tureen — by Lobster Films, Groupana Gan Foundation and the Technicolor Foundation for Cinema Heritage. It‘s distributed by Flicker Alley in a deluxe steelbox limited edition that no movie lover should pass by. Don’t.

A Trip to the Moon, a generous 15 minutes long in an era when many movies barely lasted a minute (for its time, it’s almost epic-length) is a story told Melies-style — theatrically, dreamily, energetically – in a series of theatrical tableaux, statically shot but crammed with action, all conceived, designed, drawn, written, directed (and starred in) by the bald, bearded, many-faced Melies himself.

The movie recounts the adventures of five very brash, courageous and almost obnoxiously energetic French scientists, led by Melies as The astronomical society president. The group agrees to the voyage, during a scientific colloquium that descends into a rowdy brawl. Later, after being garbed and sent on their way by a chorus line of beauteous lady manservants in tighy pants, the quintet obsereve the making of a projectile being prepared on the rooftops of Paris, guided by more beauteous servants (now in short-shorts). Eventually, they’re popped into the projectile — without oxygen, without space suits, without apparently any cosmonautical training, and in natty outfits that seem more appropriate for a stroll in the Bois de Boulogne. That bevy of French beauties, then loads the huge gun and shoots it (and them) at the moon — where the ship famously hits the man in the moon’s eye, and triggers a gush of liquid: blood red in the restoration.

Sacre bleu! Sacre rouge! Our dapper heroes emerge, and breathing in the moon’s atmosphere with no difficulty, they camp out under the stars (and the star-sirens), then wake up to explore a cavern of mysterious umbrella-mushrooms and later engage in a battle with the space aliens they suddenly discover: impudent back-flipping moon men or “selenites“: acrobatic beings (in real life, played by entertainers from the Folies Bergeres) who keep somersaulting and vanishing in puffs of (now colored) smoke.

The war is on! The intrepid men of science, staving off hordes of back-flipping selenites, push their trusty space ship off a cliff into space and return to Earth in triumph, crashing into the ocean and rising again, meeting the lady manservants again for a truly gala celebration.

All this in only fifteen breathless minutes! Melies, a genius of titanic whimsy, who ultimately was driven to end his career and destroy his negatives (by the brutalities of commerce), struck a vein of purest magic in A Trip to the Moon – and the new Lobster/Flicker Alley release of the original color version is something to behold, something to treassure. The film was deteriorating in Spain, when it was discovred in 1995 and an exchange was arranged. For years too fragile for normal restoration, the work of making it watchable again started in 2010, and the restoration was premiered at Cannes in 2011. In triumph I hear. With another bevy of beauties, I hope. I wasn’t there, but I’m sure they all loved it, even the Man in the Moon, even after he got stuck in the eye for the zillionth time. You will too, I hope. If you don‘t, all I can say is “Cover your eye, mon ami.” (I prefer the black-and-white version, by the way. That doesn’t mean the color wasn’t worth it.) (Silent, with English intertites, or English narration and original music score by Air.)

Extras: A beautiful print of the black-and-white A Trip to the Moon, with three different sound tracks. Number One: an orchestral accompaniment composed and conducted by Robert Israel, with Melies’ original English language narration. Number Two: A dramatized version, with voice actors dubbing the onscreen players, produced by Russell Merritt, with a piano score by Frederick Hodges. Number Three: a silent version, with Hodges’ music.

A fine documentary on the history of A Trip to the Moon and its color restoration,The Extraordinary Voyage (France: Serge Bromberg & Eric Lange, 2011) (Three Stars)

An Interview with the musical group/composers Air, on their score for A Trip to the Moon.

A booklet, with a long excerpt from “A Trip to the Moon Back in Color, by Serge Bromberg and Severine Wemaere.

It’ll sound like hyperbole. But this jewel-box of a five-disc set, containing 173 movies by the astonishing French cinematic pioneer/master Georges Méliès, as well as Georges Franju‘s splendid 1953 documentary Le Grand Méliès, is definitely one of the most important DVD releases ever, as well as an unfailing source of cinematic joy and pleasure.

Melies‘ movie career began in ‘96, shortly after the Lumiere brothers’ invention of motion pictures. (Or so the French have it; sorry, Tom Edison). Quickly, he became world-famous. A magician and creator of theatrical spectacles at his Robert Houdin Theatre, Méliès instantly took to cinema, creating little mini-spectacles that would rivet the nickelodeon audiences, as well as the ones that packed the Robert Houdin (where he played piano and narrated his films).

Melies made several types of movies — predominantly fantasies (romps full of imps, devils and playful monsters), journey and adventure films, including his most famous, 1902′s A Trip to the Moon; comedies (full of explosive slapstick), magic and trick films (based on his own magic acts), but also dramas and “actualities” (faked documentaries). He was almost outlandishly prolific. This set includes 173 films and excerpts. But, in his life, in less than two decades, he made over 500. True, they weren’t feature length — they ranged in length from a minute to half an hour — but they’re as satisfying as many a feature. Watch these 13 hours‘ worth over several evenings, and don’t let the antique style (no close-ups, painted backdrops) throw you, and you’ll be infallibly, even wildly entertained.

Méliès was a true genius, a cinematic artist of the first rank and this collection proves it. No only did he write and direct his little gems, but he designed and executed the gorgeous sets and fantastic creatures, and he’s also the bald, slender, bearded lead actor or comedian in many of them. All his better-known masterpieces are here (with the original tinting and sometimes with Méliès’ own narration recreated): A Trip to the Moon, The Kingdom of Fairies (1903), The Impossible Voyage (1904), The Palace of the Arabian Nights (1905), The Merry Frolics of Satan (1906), The Eclipse (1907) and The Conquest of the Pole (1912), as well as some gems you’ve probably missed, like The Christmas Dream (1900), The Devil in the Convent, Blue Beard (1901), The Infernal Cakewalk (1903), The Inn Where No Man Rests (1903), A Moonlight Serenade (1904), The Chimney Sweep (1906), and Baron Munchausen‘s Dream (1911).

But there are also some films and genres you wouldn’t expect: an 1899 serial on the Dreyfus Affair. some Lumiere-like “actualities” (reality films or faked documentaries), outdoor and real-life train films, a 1900 historical epic on Jeanne d’Arc, adaptations of “Rip van Winkle,” “Faust” and (twice) “Cinderella.” And what I suspect is one of the first-ever film noirs, or at least pre-noirs, the 1906 true crime thriller A Desperate Crime — a mini-shocker that includes robbery, murder, a chase, a police battle, a death row expressionist nightmare and a chillingly realistic beheading at the guillotine, all in only seven thrill-packed minutes.

It’s customary to juxtapose Méliès and Lumiere as the poles of early cinema: fiction fantasy and documentary. True enough. But Méliès was the greater inventor and genius. Sadly, he went bankrupt in 1913 and, desperate now himself, rashly burned all his priceless negatives in 1923 to get more living space for his family. It’s a sad tale (poetically told by Franju, and more crowd-pleasingly in Scorsese‘s recent Hugo).

But the films themselves, assembled from around the world, are unfailingly merry and brilliant, They can make you drunk with delight. Melies was a cinematic Vivaldi; so masterly, one never cares if he repeats himself. Discover him again. You’ll be bewitched. (Silent, with English intertitles and original music scores by Robert Israel, Donald Sosin, Frederick Hodges, Eric Beheim, the Mont Alto and others.)

Booklet, with introduction by the great Canadian animator Norman McLaren, an essay by John Frazer, and a complete list of the films.