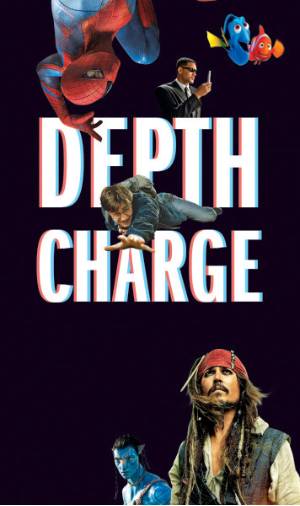 A novelty from 1950s movie screens has grown up — and might be here to stay.

• Three of the top five films of 2011 — Harry Potter and the Deathly Hallows: Part 2, Transformers: Dark of the Moon and Pirates of the Caribbean: On Stranger Tides — were 3-D films.

• About 30 3-D films are scheduled for release in 2012, including anticipated blockbusters The Amazing Spiderman 3D, The Avengers and Peter Jackson’s The Hobbit, a prequel to his “Lord of the Rings” trilogy.

• And a 3-D version of F. Scott Fitzgerald’s American classic The Great Gatsby is due in theaters at Christmas, a sign that 3-D might be evolving into a vehicle for serious films not dependent on action sequences.

“Today, we’re starting to see 3-D being used more as a way to explore filmmaking with serious directors in a variety of films,” said Patrick Corcoran, director of media and research for the National Association of Theatre Owners, the largest trade association representing movie theaters.

“You’re seeing talented filmmakers explore the possibilities — not just as a gimmick or add-on, but just like they look at color and sound as part of telling their stories.”

The three-dimensional technique, derived from stereoscopic photography, records images from two perspectives, then uses projection hardware and viewer glasses to enhance the illusion of depth perception. Since 1915, 3-D movies have existed in some fashion, but they became a fad in 1950s and again sporadically in the ’70s, ’80s and ’90s, thanks largely to IMAX big-screen theaters.

In this century, James Cameron’s Avatar (2009) was a record-breaking science-fiction blockbuster that rejuvenated and popularized the 3-D form.

Techniques have vastly improved since the ’50s.

“One of the big obstacles in earlier 3-D eras was the limitations of the films and the projections,” Corcoran said. “You’d get a slight shudder, throwing off the effect. With today’s digital 3-D, you get a more stable image, and there’s more they can do with it.”

Lynette Carpenter, who teaches film classes at Ohio Wesleyan University and is chairwoman of the English Department there, thinks the 3-D trend will continue, “especially for adventure, science fiction and fantasy films.

“But it also has artistic potential,” she said. “3-D can be quite wonderful when it’s used by someone who knows how to play with it.”

Among the directors with the artistry, reputation and potential to broaden the range and respectability of 3-D films, Corcoran points to Martin Scorsese, Wim Wenders and Baz Luhrmann.

Scorsese’s first 3-D effort was Hugo, a family-oriented historical drama from last year about the wonders of early filmmaking. Adapted from a children’s novel, Hugo received the most 2012 Oscar nominations — 11, including best picture — and won five.

Wenders shot his dance documentary Pena in 3-D, while Luhrmann surprised the industry by deciding to shoot The Great Gatsby in 3-D. Leonardo DiCaprio, Carey Mulligan and Tobey Maguire will star.

“I don’t think of The Great Gatsby as 3-D material, but I trust Luhrmann’s artistic instincts,” Carpenter said.

Other 3-D films set for release this year include MIB3, a Men in Black sequel starring Will Smith and Tommy Lee Jones; Prometheus, Ridley Scott’s mythological-origins prequel to Alien; and Disney-Pixar’s animated Brave and 3-D rerelease of Finding Nemo.

“You just feel part of the environment. . . . There’s a sensational feeling of traveling in space in Finding Nemo in 3-D,” Whitehill said.

Pixar, currently working to upgrade Monsters, Inc. for a 3-D rerelease early next year, now makes all of its animated films in 2-D and 3-D, continuing to offer audiences the choice of whether to see them in the more-expensive format.

“We view 3-D as like a film’s musical score, with much of the effectiveness in the background but with moments that stand out,” Whitehill said.

“Clearly, 3-D is not going to make your characters more compelling or your story more interesting. At the end of the day, it’s the story, humor, emotions and characters you care about that make a good film.

“But 3-D is another part of the toolbox for filmmakers to use to enhance the powerfulness of our films, like great lighting, set design or the score.”

The 3-D onslaught should grow, judging from the trend on U.S. movie screens.

Unlike previous 3-D eras, movie-theater operators are adding 3-D screens as if they expect 3-D to last this time — even with its current limitations.

Chris Hamel, president of the Gateway Film Center, said 3-D films do well at the Gateway, giving moviegoers the incentive to go out rather than watching a movie on DVD, Blu-Ray or cable at home.

But, he said, “studios have done a poor job of execution in some films, and that drives the viral message that 3-D doesn’t look good. The screen can look dark or the image can be blurry, and that has a lot to do with the studios taking shortcuts.”

Viewers often feel uncomfortable wearing the 3-D glasses, and most theaters add $3 or $4 to the ticket price of a film shown in 3-D.

“Forking over 15 bucks to see state-of-the-art 3-D is unfortunate, but the proof is in the viewing,” said German Village resident Rich Stadler, who took in the 3-D version of Titanic, released on Wednesday.

“Once you get accustomed to the glasses and the lower level of brightness . . . great 3-D movies are spectacular experiences that make me feel like I’m on a roller coaster and in the world of the film, but I have to decide whether I can afford it.”

Terry Wilson, a photographer and electronic-media producer who lives in Fairfield County, has skipped most 3-D films because of their higher ticket prices but came into the city to see Avatar and Hugo, which he considers the two best 3-D efforts.

“I’m not looking for gimmicks but authenticity,” said Wilson, 60.

Movie-theater chains are aware of the concerns.

“But now the audience is treating 3-D releases like any other films. There’s less of a rush to see it in 3-D and more of a judgment about whether it’s worth seeing.”

“Ultimately,” Hamel said, “audiences will decide whether 3-D works or if it will fade away like it did in the ’50s and ’80s.”

The most popular movies in the format and their U.S. grosses:

• April 27:The Pirates! Band of Misfits

• Dec. 14:The Hobbit: An Unexpected Journey

Note: Release dates and some titles are subject to change.