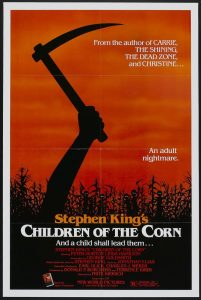 Certainly one of the better adaptations of a Stephen King tale, Children Of The Corn, for me, was a goosebump film. But all the more chilling was an unseen, Evil Force who a group of murderous children happily calls “He Who Walks Behind The Rows” (Rows, meaning rows of corn in a corn-field) The image you get of this “He Who Walks Behind The Rows” character is simply Satan with a new nick-name. And why old Lucifer has chosen to possess a billion ears of corn in Nebraska {instead of the John Deere tractor sitting alongside of it} is beyond me. Whatever the reason, the fact that he’s somewhere within that cornfield gave me the chills throughout this film. More chills than watching these children go on a killing rampage throughout the small town. Anyone over the age of 17 was quickly laid to rest at the beginning of the film, and any kid about to turn 18 happily sacrificed themselves to “He Who Walks Behind The Rows”.

The film stars Peter Horton and Linda (Terminator 1 and 2’s) Hamilton. By accident, they enter this small town and become the towns only two grown-ups. Once spotted, they are quickly labeled “Outlanders” and are pursued throughout the remainder of the film until they are finally caught, bound and prepared for sacrifice.

I love this film. Its had a special place in my heart for years. There is not a boring moment in this film that would put you to sleep. There are many jolts, winces and frights. And even though the “He Who Walks Behind The Rows” fella never shows his face, you will definitely feel it’s presence. Trust me. Just knowing that he’s somewhere in the midst of that cornfield will be enough to creep you out.