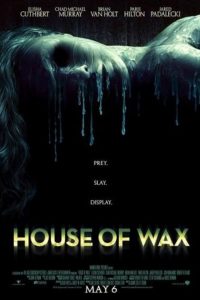 Carly Jones (Elisha Cuthbert) is a young woman, traveling with her trouble-making brother, Nick (Chad Michael Murray), and boyfriend, Wade (Jared Padalecki). They are, along with Paige (Paris Hilton), Blake (Robert Ri’chard), and Dalton (Jon Abrahams), hoping to score tickets to the final football game of the season. Along the way, they run into some car trouble, and are forced to enter a desolate town where nothing is what it appears to be.

Upon hearing of this, a remake of the classic Vincent Price B-movie, I rolled my eyes. I did not even want to think about what disaster freshman director Jaume Serra had cooked up for his audience. In a time when most high-profile horror films are disappointments, latent with bad writing, static direction, and amateur acting, I consider myself lucky that Serra and the Hayes brothers took it upon themselves to make a good, old-fashioned, spook fest. Unlike the disappointments that I named before, this flick pulls no punches, and uses every cinematic trick in the book to give everyone exactly what they came for.

I am happy that the Hayes’ actually took the time and effort to create likable and believable characters, thus making the events that much more urgent. It also gives the young actors portraying them something grip on. As she did in “The Girl Next Door”, Elisha Cuthbert proves to audiences what a skilled actress she really is. In the 2003 remake of “The Texas Chainsaw Massacre”, Jessica Biel silenced naysayers by delivering a raw and emotional performance, one that put the viewer right there with her. Here, Cuthbert does the same. Chad Michael Murray (“A Cinderella Story”), in one of his first more mature roles, is no slacker as Nick. Murray exudes charisma and a hard edge, as well as some impressive athleticism on top of it. Murray and Cuthbert gel perfectly, and have tangible, familial chemistry.

More so than anything else, the press and the American public have made a field day about Paris Hilton’s major acting debut. As I expected, Hilton does not embarrass herself. In fact, she is just as good as anyone else in the movie (do with that what you will). Like Cuthbert and Murray, Hilton has screen presence. She is sexy and playful. I cannot think one of reason why she’s gotten the worst of the film’s harsh reception, other than they are simply picking on her. Jared Padalecki (TV’s ‘Gilmore Girls’) memorably manages to overcome his underwritten role. Robert Ri’chard (TV’s ‘Cousin Skeeter’) and Jon Abrahams (“Meet the Parents”) do not have much to work with, but get the job done. With only one scene, Damon Herriman (“Soar”) makes an unforgettable impression, and his presence hangs over the rest of the film. Finally, Brian Van Holt (“Basic”) is superb and threatening in a dual role.

Once more, kudos must go to the screenwriters for avoiding clichés whenever possible. Despite popular opinion, “House of Wax” is quite unpredictable for a majority of its running time. Take this for example: It seems as if the killer is down for the count and Carly bends down to retrieve something from his pockets. What do you expect to happen? See the movie, and you will understand what I mean. It is also refreshing to see a horror film in which the characters show even a modicum of good sense.

Unlike most horror scores, John Ottman’s exhilarating work never distracts. However, as with Dark Castle’s other releases, the visual aspects of “Wax” are award-worthy, and lift the film above its genre trappings. The talents of cinematographer Stephen F. Windon, production designer Graham Walker, art director Nicholas McCallum, and editor Joel Negron highlight the ghoulish imagery. Speaking of imagery, I believe that the gore hounds will be thrilled with the many makeup effects and tricks in store here. Each death scene is more stomach churning than the last. Considering his past in music videos and commercials, it is obvious that Jaume Serra has a great eye for style. His “in-your-face” approach is a great asset to this film’s success. Just when you think the camera will turn away, it does not. He is also particularly good a building thick layers of dread and atmosphere. One standout shot is our introduction to the killer, as he slowly emerges from a trap door.

In a case like this, I would usually admit when I am in the minority (Shut up, okay? I liked “House of 1000 Corpses”!). In this case, I firmly that the detractors have gotten it wrong. I am not sure why people are so hard on this film, considering it’s much better than recent genre entries. Maybe they’re afraid to admit that a horror flick starring Paris Hilton could possibly be worth watching… Who knows? This is a horror film, and a commendably stylish and effective one at that.