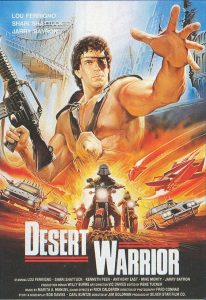 Lou Ferrigno fans will not be disappointed–he is the best part of this dismal production. Lou is far from being in his best physical condition (similar to the way he looked in the movie Cage). He wears a Hercules-type outfit throughout, but does not show off in any muscle-flexing events. Even when he runs (and this happens surprisingly often) there are no close-ups or slow motions. Obviously he was not selected for his pulchritude. Perhaps the director was trying to showcase Lou’s acting ability instead. Lou is fairly good at pretending to be sad and not so good at acting angry (also similar to Cage). Yet his acting is better than anything in the rest of this movie. It is even better than that of most of the other players (or were they customers selected at random from a Walmart parking lot?)–one could not enunciate his lines enough to be heard and another’s slight accent undermined the authority of his character. The sets are truly cheap without any redeeming innovations. The equipment is pathetic and contributes to the farce. And there is barely any continuity or logic to the story line–a pity because the basic premise is decent sci-fi and the ending both uplifting and conclusive of the opening scene.