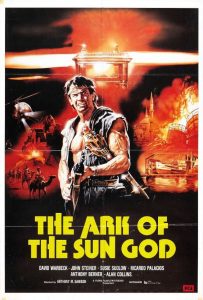 First off, I’m a big fan of Italian genre cinema in general and of the director Antonio Margheriti in particular. This isn’t film as art but commerce. The Italians were experts at exploiting the popularity of various American films and selling the imitations worldwide. This particular film is (obviously) derivative of Indiana Jones with a little James Bond thrown in.

Margheriti was a very competent director who elevated the cheap films he directed. He almost always assembles a solid cast (as is the case in Ark of the Sun God) and packs his movies full of outlandish special effects. His use of miniatures is especially impressive although this film doesn’t reflect his best use of them. Although I have high praise for his work both in this film and others, many people will laugh at what is presented. It is a cheap film and the FX aren’t always anywhere near Hollywood standards. But Margheriti still consistently produced entertaining films, on the cheap, with exotic locations (in this case Turkey), and wild FX. It’s the cinema equivalent of a comic book from the 50s…cheap, disposable, juvenile, but fun as hell.

As to this film in particular, Ark of the Sun God is an entertaining adventure film that takes place mostly in Turkey. David Warbeck is solid (as usual) as the lead, as is John Steiner who takes on a secondary role. Lucinno Pigozzi, who is a regular in Antonio Margheriti’s films, returns here as Beetle–he was a very solid character actor little known outside of Italy. Of course the whole movie is dubbed (many Italian genre films of the era were filmed without sound and dubbed in post-production). The plot involves finding and stealing a valuable artifact from an ancient tomb, all the while being chased by various goons. Standard boilerplate nonsense. The whole thing is utterly ridiculous and disposable. If you’re looking for innovative cinema, look elsewhere. But the movie is fun in the same way as those old comic books were. They were pretty much considered disposable schlock as well until folks began to appreciate the talent that went into creating them.