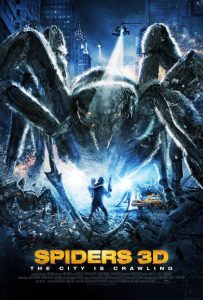 As a person who always had a love for monster movies, and spiders in particular, then it was a thrill to stumble across this movie. Initially I had feared that it would have been much worse than it actually turned out to be, as the genre of monster movies tend to turn out to be campy, goofy and usually have horrible effects that are just downright painful to watch.

This 2013 “Spiders” movie, however, did come to prove my initial fears wrong. Especially because the spiders in the movie were actually quite nicely animated and looked realistic enough. Well, as realistic as you can go when dealing with a 6 foot arachnid. The creature designs were nice and held lots of good details, and it was greatly helped along the way by the good CGI. One thing did bother me though, and it was the sounds they opted to put on the spiders. Growling, screeching and hissing, come on now, seriously? It just gave the spiders a cartoon-like quality that didn’t really help them along in any way as for being menacing or monstrous.

About the storyline, well it is fairly straight forward textbook scripting here; a top secret non-American experiment that took place it outer space crashes down on Earth – in New York, of course – and with it came the mutated arachnids that grow at an accelerated pace, becoming a threat to all of New York in record time. And it is up to a small handful of people to put a stop to this outer worldly threat before it is too late.

As for the people in the movie, well then it was fairly ordinary performances here, with mostly no outstanding performances, aside from possibly Patrick Muldoon. People did good enough jobs with their roles and characters, but there was just an general sensation of lack of enthusiasm lurking behind some performances.