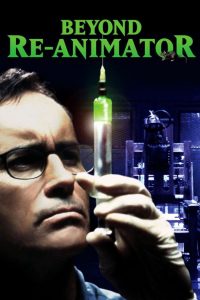 This third Re-Animator movie delivered what any fan of the series would expect. The formerly dead jitterbug about after receiving a dose of reagent from Herbert West. West again has a love stricken assistant. West’s assistant is again in a love triangle with West’s would-be nemesis. So, why not pop Re-animator or Bride of Re-animator in if there is nothing new? Good question. Here are some reasons

1- The effects in this film are top notch.

3- There is a new twist to the re-animation process that shows some promise in `clinical trials’.

There are some really convincing effects throughout the film. Makeup and effects are more than window dressing in a film of this nature. Inadequate attention to either would have dropped the value of this film immediately. You believe that these guys have been dead and now no longer are. They are much more believable than JarJar Binks.

Herbert West is over a decade older in this film. Combs takes this maturity and adds it to the character he molded in the previous efforts. It’s obvious that he is the same Dr. West yet it is also obvious that time has added to the character. Even more interesting, at the beginning of the film is a flashback where Combs plays the younger West. It’s an opportunity to compare the two portrayals almost side by side. The essence of West remains, the speech pattern, the physicality remain. What Combs added to West’s character is a veil to the intensity. What was once a roaring fire is now under control. He is no less determined, just a bit more subdued in expressing it.

The addition to the re-animation process, which I will not discuss in particular, adds another moral dimension to the question of the correctness of bringing back the dead. Although this moral dimension is directly addressed in the film, Medical Ethics 101 it is not. The ethical question is covered briefly and in the context of the fate of West’s nemesis. As with all Re-animator activity conducted by West time is valuable and little of it is wasted. Events are happening rapidly and under less than ideal circumstances.

The DVD version has an music video on it, which was a surprise. It also has a `making of’ short that should have had about another five or six days of work done to it before including it. It does have interviews with the principle actors and with the director. Have your subtitles turned on, the actors, with two exceptions speak Spanish even during the clips from the movie included in the short.

As any good sequel will, this one leaves open the possibility of yet another Re-animator movie. Hopefully the production quality will continue its improvement. Maybe Bruce Abbott and Barbara Crampton can be re-animated for the fourth film.