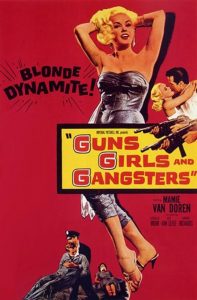 “Guns, Girls, and Gangsters” not only has a great title, but this inexpensively made film works well for lovers of film noir. While it doesn’t have all the great lighting and camera angles of some of the best noir, it does have a cold, nasty edge to it that makes it a standout picture.

When the film begins, Chuck Wheeler (Gerald Mohr) boldly approaches the nightclub singer, Vi Victor (Mamie Van Doren*) and insists she introduce him to her boss…a sophisticated hood. When I say insists, I pretty much mean he forces her with threats and intimidation. Why would Chuck take his life in his hands this way? After all, this boss ALSO is sweet on Vi. Well, it seems that Chuck and his cellmate in prison came up with a great plan to steal $2,000,000 and if they keep their heads, they’ll all be rich.

Unfortunately, like almost all film noir movies, there is a glitch that gets in the way of this can’t miss plan…that cellmate, Mike Bennett (Lee Van Cleef) escapes from prison. Mike is a sociopath and is mostly concerned with killing anyone who is involved with Vi- -even though she divorced him long ago. Without even bothering to find out what was going on, he starts killing folks! In fact, killing people is like eating potato chips with this guy…he can’t stop at just one! So what is the clear-thinking and slick Chuck going to do? And, will this great plan STILL work?

I appreciated a lot about the film. Despite Mamie Van Doren, Gerald Mohr and Lee Van Cleef all being B or C-list actors, they are all excellent and very convincing. Additionally, the script is very tough and gritty. An exciting little film…one not to be missed by noir nuts like me!

*I have no idea HOW she’s done it, but I’ve seen recent pictures of Miss Van Doren. Despite her age, she is incredibly sexy and not the least bit apprehensive about posing in the nude. Heck, most 30 year-olds would be thrilled to have a body like hers….and I can only assume she has some sort of Dorian Gray sort of pact with the Devil that allows her to be so timeless.