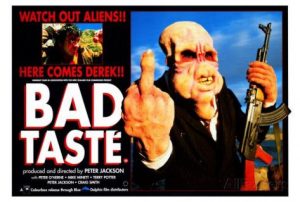 Goofy and ridiculously exaggerated horror-comedy, obviously made by a group of unprofessional movie-lovers and friends. Dig this: big potato-headed aliens slice up an entire little town in order to serve them in an intergalactic chain of fast-food restaurants! Four eccentric lowlifes are after them (they form a government agency called A.I.D.S – Alien Investigation and Defense Service). Peter Jackson (yes, THE Peter Jackson) desperately tries to hide the fact that he doesn’t have the story by showing a whole lot of nasty gunfights and immature butchering. Buy hey…who’s complaining? Bad Taste is great fun and one of the most hilarious horror-comedies ever. Nobody in the cast knows how to act, the make-up effects are cheesy and the cinematography is laughable. Jackson himself plays Derek, an obsessive freak that constantly has to re-install his own brain after he lost some cells in a fall of a cliff. There isn’t one `scary’ moment to detect in Bad Taste, but the vulgarity and nastiness-level is pretty high… Chainsaw dismemberments, crushed skulls…you name it and Peter Jackson shows it! Even drinking someone’s fresh vomit is possible in his wicked imagination!

As Jackson’s budget slowly increased, so did his filmmaking skills. He continued to make fresh New-Zealand horror with `Meet The Feebles’ (brilliant and imaginative puppet adventure) and `Braindead’ (perhaps the goriest film ever). When you see him here in Bad Taste, you’d never say he’ll win an Oscar for best director once but it only gives more cult-value to the film. This is an ideal motion picture to watch with a group of friends, with lots and lots of alcohol and pizza. You’re not missing out on anything if you haven’t seen it yet, except for a real good time.