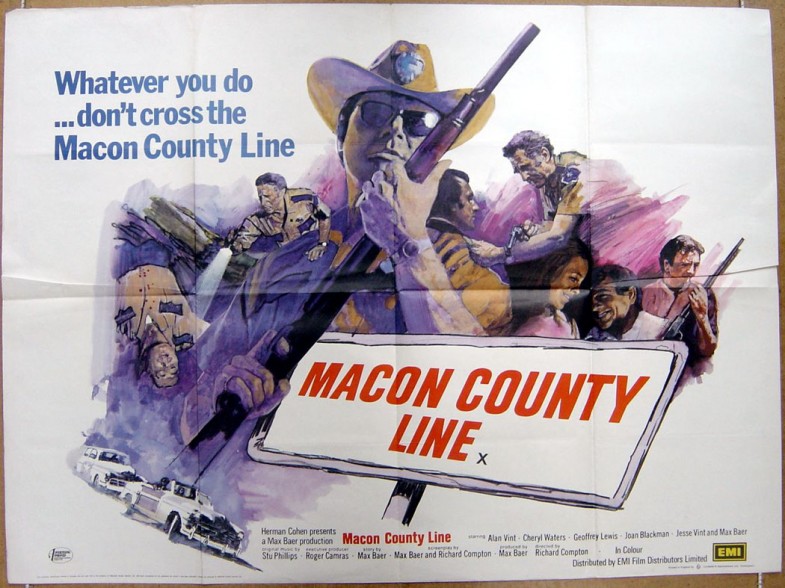 One of the great independent movies of the 1970s, Macon County Line transcends the “redneck nightmare” genre simply by making its characters fully-rounded human beings. Two brothers, Chris and Wayne Dixon (played by real-life brothers Alan and Jesse Vint), are tooling around the South in a convertible, killing time before they have to show up for army basic training. They pick up a hitchhiking girl named Jenny Scott (Cheryl Waters), then cross the path of Deputy Sheriff Reed Morgan (Max Baer, Jr., most famous as Jethro on The Beverly Hillbilllies), who doesn’t like having strangers in his town. But also passing through are a couple of smalltime crooks, one of whom has a traumatic response to cops. Bad things happen, Morgan thinks the Dixons are responsible, and the situation gets very tense. This plot could have been a lurid exercise in bloody revenge, but instead Macon County Line (which was produced and co-written by Baer) takes every opportunity to make the people real and unpredictable. Scenes move fluidly from comedy to suspense; moments that look like they’re going to be cliches instead reveal unexpected dimensions. The women–usually little more than props in movies like this–aren’t given as extensive a role in the story as men, but they’re still individuals with their own ideas and desires. The cast is studded with the familiar faces of steady-working character actors like Geoffrey Lewis (Every Which Way But Loose) and James Gannon (Major League), who give even minor characters grit and texture. Macon County Line has all the sex and violence of its exploitative genre, but treats them with empathy and smarts; the result is a roughhewn classic