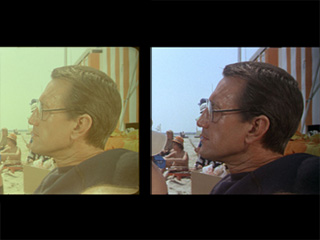 Though it’s credited as giving birth to the modern summer movie blockbuster, for the last 15 years Jaws has been as much a staple of basic cable programming as Law & Order re-runs. Many have only seen the shark-infested thriller chopped and cropped for television, but soon they’ll get a chance to rectify that grave miscarriage of cinematic justice.
To commemorate the studio’s 100th anniversary, on Aug. 14, 2012, Universal is releasing a digitally remastered and restored Jaws on Blu-ray, with a brand new 7.1 surround sound mix and four hours of special features. Director Steven Spielberg worked with Universal’s in-house archives and restoration services on the new print, starting with the original negative of the film — which Spielberg calls “pretty crummy” in a featurette on the Blu-ray. You can watch that special on the restoration below, along with exclusive before and after shots from the film that show just how painstaking the visual renovation was. Check it out: