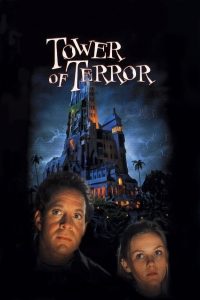 Among great family “horrors” like Hocus Pocus, The Witches, Monster Squad, and others, Tower of Terror (1997), starring Steve Guttenberg and a young Kirsten Dunst, is often forgotten. This is unfortunate because it’s one of the rare family horrors that actually manages to be simultaneously fun, acceptable, and scary for everyone. Basically, like the botched Eddie Murphy film The Haunted Mansion, Tower of Terror is a vehicle to show off a Disney World attraction through a 90-minute narrative commercial. Unlike The Haunted Mansion, however, this film is actually good! The story focuses on Buzzy Crocker (Guttenberg), a journalist for a National Enquirer-esquire tabloid. In an attempt to become a serious writer again (and win back the affection of his old flame Jill (Nia Peebles)), Buzzy heads to the old Hollywood Tower Hotel, where he is told five people mysteriously disappeared in an elevator after the hotel was struck by lightning nearly 60 years prior. Said to be haunted, Buzzy wants to find out the truth and his niece Anna (Dunst) wants to join along with him to help make the story.

While the film is certainly nothing Emmy-award winning, it delivers on all it promises. It’s very cheesy, fun, & entertaining, and has quite a few creep-out moments (especially for a kids’ TV movie). To this day, the little-girl-in-the-rain scene gives me the chills just thinking about it. It does stick around the typical standard of Disney TV movies as far as writing & directing go, but it manages to work in a way that looks and feels better than even a big-screen adaptation like The Haunted Mansion. Obviously, this is not going to be the film for someone looking for a hardcore frightfest, but for a lighthearted time with or without the kids, I’d highly suggest this one.