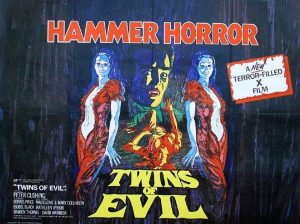 Gustav Weil (Peter Cushing) is the leader of a rampaging vigilante group determined to eradicate vampires and witches. Weil’s job is complicated when his twin nieces move in with him, and one of them is attracted to the local bloodsucker. Frieda and Maria (Madeleine and Mary Collinson) discover the allure of sinister aristocrat Count Karnstein (Damien Thomas), and he unleashes the evil inherent in one of them … but can Weil tell which one?

Netflix says this film features “busty teenage orphans”. Not sure what to make of that. I guess it is true they do spend part of the time laying around in low-cut nightgowns, and another time the nightgown of one comes open when a crucifix is thrown at her, and they were Playboy models, but is this the selling point of the film?

From director John Hough (“Legend of Hell House”), based off of “Camilla” and being a Hammer Production, you know this is going to be good. Not sure what to make of the black servant who grunts and gesticulates wildly, being treated like Lassie, though.

Some reviews stress the way this film “tears” the audience: you do not want to root for the vampire, but you also do not want to side with the puritan. I thought the decision was pretty easy, but maybe some people get torn on issues like this.