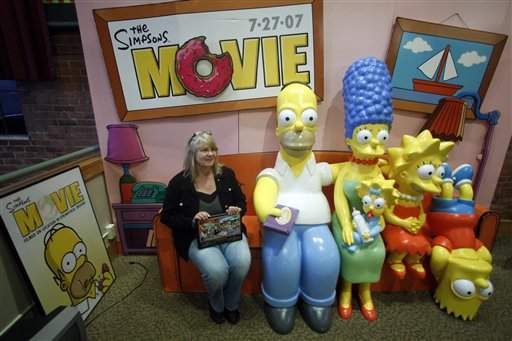 The Springfield that exists in the mind of Matt Groening is a kind of American everything — hick pit stop, rosy-cheeked Rockwellian font of family values, cesspool of corruption, ethnic melting pot, boomtown gone to rust.

It’s what the creator of “The Simpsons,” the nation’s longest-running sitcom, used as a backdrop for 22-minute allegories about the American experience, beginning as earnest tales about a lower-middle class nuclear family and expanding to encompass spoofs of presidential elections, the obesity epidemic and “Citizen Kane.”

It’s also, according to an interview posted online Tuesday, a real place. Groening told Smithsonian magazine that he was inspired by the television show “Father Knows Best,” which was set in a town called Springfield. Springfield, Ore., is 100 miles south of Groening’s hometown of Portland.

“When I grew up, I realized it was just a fictitious name,” Groening said. “I also figured out that Springfield was one of the most common names for a city in the U.S.

“In anticipation of the success of the show, I thought, ‘This will be cool; everyone will think it’s their Springfield,'” he said. “And they do.”

The acknowledgement ends one of the longest-running mysteries in popular culture. But people in town on Tuesday weren’t quite sure what to do with the information.

“He did?” asked convenience store manager Denise Pohrman. “I think that’s a good thing. I think.”

But how should the town react? On the surface, it’s not a flattering portrait. Groening’s Springfield is polluted and sad, run by corrupt officials and beset by the simpleminded populace that keeps voting for them.

“There’s the stuffy part of history, and then there’s the trivia,” Pohrman said. “Everybody needs some fun.”

The real Springfield is a western Oregon town of about 60,000 people. Its’ quiet Main Street is struggling in the face of a recession while the highway-based chain stores and restaurants survive or thrive. Its median income is just under $40,000 and nearly 20 percent of people of all ages live under the poverty line.