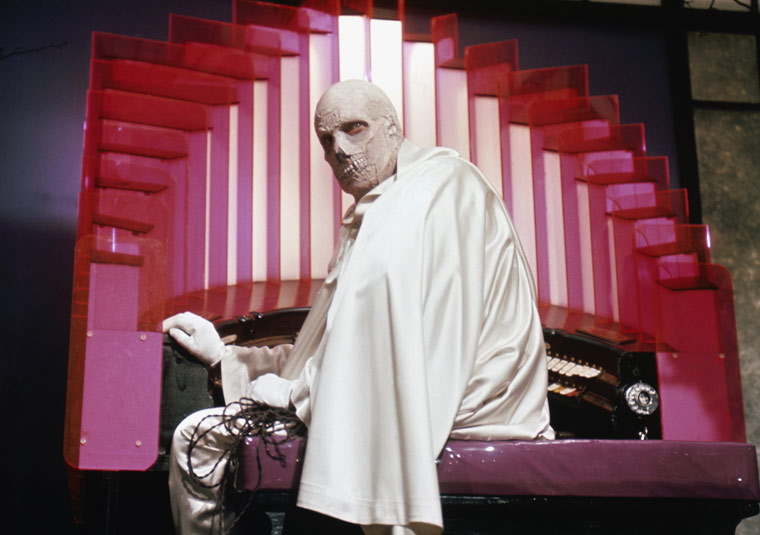 On 21 March 2012, the British horror cinema lost of one of its most interesting and distinctive talents, director Robert Fuest. Although his association with the genre was very brief, he achieved cult status for directing two very popular slices of classic English Gothic, The Abominable Dr Phibes (1971) and Dr Phibes Rises Again (1972).

A former set designer with a unique visual flare, Fuest represented a group of innovative and original film-makers that formed an important part of the horror genre of the late sixties and early seventies. These luminaries included Roman Polanski, Michael Reeves, Peter Sasdy, Daniel Haller and Curtis Harrington. Fuest came on the scene much later on, and like his colleagues before him, never quite fulfilled his early promise. Its fair to say Fuest never had much of a chance. The horror genre of the late sixties was beginning to lose direction, both artistically and commercially, and by the mid seventies, the terminal meltdown of the British market in the wake of The Exorcist (1973) drove many promising young film makers, Fuest included, to the less distinguished confines of television.

Robert Fuest was born in London on 30 September 1927. He did his national service in Germany with the Royal Air Force where he helped airlift coal over the Berlin Wall. Art was a major influence in Fuest’s life; his striking use of visuals would be an important factor in his future film career. Following his discharge from the RAF, he attended the Wimbledon and Hornsey Schools of Art. Fuest quickly made his name as a painter. His work has been on exhibition at the Royal Academy since 1951.

Diana Rigg in ‘The Avengers’Fuest became a lecturer at the Southampton College of Art. Actively involved with the London jazz circuit, he worked as a drummer for such big name musical figures as Chris Barber and George Melly. After a spell as a copywriter, he eventually moved into television in 1957 as a set designer. Fuest worked as a graphic designer for Associated British Television, working on the popular shows Play of the Week and Armchair Theatre. His designs became more prominent when he started work on the first series of the popular spy show The Avengers. The director of the series was Peter Hammond, whose own visual style greatly influenced Fuest. More importantly it gave Fuest the desire to direct as he felt it would open up new challenges in presenting images on screen.

By 1962 Fuest was directing TV commercials and documentaries, as well as providing comedy scripts for Peter Cook and Dudley Moore’s show Not Only…But Also. His work on The Avengers impressed director Richard Lester, who hired him to write and direct the short film Just Like a Woman (1967) starring Wendy Craig. Although the film was well received it was not a success. But it impressed producer Albert Fennell enough to hire Fuest to direct several episodes of The Avengers. By this time, the show had veered toward high camp silliness, but it enabled Fuest to show off his quirky sense of parody, another useful trademark in his film career.

Fuest made his feature film début with a neat, if somewhat routine, little thriller called And Soon the Darkness (1970). Set in rural France and based on a script by Brian Clemens and Terry Nation, the film centres on two nurses (Pamela Franklin and Michelle Dotrice) being stalked by a serial killer. It certainly builds up the suspense, but the handling, although efficient, lacked sufficient impact. The film was well received but met with little commercial success.

Anna Calder-marshall and Timothy Dalton in ‘Wuthering Heights’ (1970)And Soon the Darkness did have very important fans in the shape of American International Pictures’ Samuel Z. Arkoff and James H Nicholson. AIP had established a base in London with Louise M ‘Deke’ Heyward in charge of UK operations. With several British made horror films, doing good business, AIP decided to divert from their winning formula with an adaptation of Emily Bronte’s classic Wuthering Heights (1970). Fuest was handed the directorial assignment. Wuthering Heights was something of a baptism of fire for Fuest. Arkoff’s less than perfect relationship with Nicholson and Heyward was becoming increasingly stormy. To make matters worse, AIP’s previous attempt at moving away from the horror genre, De Sade (1969) had been a commercial disaster.

The new version of Wuthering Heights was strange to put in mildly. Starring Anna Calder-Marshall and Timothy Dalton as the doomed lovers Cathy and Heathcliff, it’s a mood piece that is too busy and over the top for its own good. However it did get a royal premiere, and the film’s moderate box office success gave AIP the notion of adapting more classics to the screen, including The House of Seven Gables, which Fuest was set to direct.

As soon as Fuest finished editing Wuthering Heights, AIP handed him a script by William Goldstein and James Whiton called The Curses of Dr Phibes. The story about a madman who uses the ten plagues as instruments of murder on the doctors who failed to save his wife’s life was pretty basic, and although Fuest found the script heavy going, he was fascinated by the Hebrew elements. With the okay from Deke Heyward, Fuest re-wrote the script as a parody set in the thirties. Renamed The Abominable Dr Phibes (1971), it was a perfect horror vehicle for AIP’s contract star Vincent Price. It also gave Fuest a chance to make good use of his visual style within the confines of the film’s £300,000 budget. It has a very surreal atmosphere interspersed with some pretty gruesome deaths and some inspired comedy moments. Fuest directs with great flare and the low budget thirties sets owe a great deal to his skills as a set designer. There is also a splendidly camp performance from Price in the title role. The acting is all the more unique because of his skilful use of mime. For once his wonderful speaking voice takes a back seat.

Vincent Price is ‘The Abominable Dr Phibes’ (1971)The making of the film had its problems. Peter Cushing was set to play Phibes protagonist Dr Vesalius but dropped out following his wife’s death (eventually replaced by Price’s Mercury Theatre colleague Joseph Cotton). The internal squabbles between Arkoff and Nicholson were further hampered by AIP having to downsize their operations in the wake of increasing production costs. And Price himself was going through a number of personal and professional problems not helped by his increasing disillusionment with the horror genre, even though his performance as Phibes ranks as one of his best.

The Abominable Dr Phibes was an enjoyable novelty film that grossed over $3 million at the box office. A sequel was inevitable and this time Fuest provided the script (the original Goldstein/Whiton draft not being good enough). Heyward once again sanctioned it with Robert Blees providing several re-writes. The end result was Dr Phibes Rises Again. Thanks to a bigger degree of confidence, the sequel turned out to be much better, even if the novelty value of the first film is lacking. Once again Fuest’s visual approach is extremely effective and the thirties art décor is as striking as before. The script itself is rather flat, but there are some excellent comic moments, and Price in typically camp form, manages to give a much better performance.

But once again there were difficulties. The relationship between Arkoff and Nicholson had broken down with Nicholson leaving AIP to become an independent producer. Studio interference and budget restrictions also hampered the movie’s overall effect. The situation was further undermined by the ill-feeling Vincent Price had towards his co-star Robert Quarry. Quarry himself felt Fuest had changed the script to make his own character look rather bland. He also thought the director could not control Price’s excursions into overacting.

But for all the faults, Dr Phibes Rises Again was just as popular. Although it did not repeat the same box office success as the first film, it made enough money to warrant a third film entitled The Curse of Dr Phibes or The Bride of Dr Phibes featuring the musical genius pitting his wits against Adolf Hitler. Once again Price would repeat his role with Robert Quarry and William Marshall, who had scored a horror hit as Blacula (1972), providing solid support.

Due to serious internal problems within AIP, the series was shelved. With Nicholson gone, an equally fed up Heyward resigned leaving AIP’s British base in seriously desperate shape. Since it was Heyward who sanctioned both Dr Phibes films, his departure effectively ended the series.

Robert Fuest’s ‘The Final Programme’ (1973)Fuest himself wanted to try other things. He turned down Price’s next two films Theatre of Blood (1973) and Madhouse (1974) because he did not wish to be too closely associated with the actor. It would have been interesting to see what the director could have achieved with both films. He also declined Nicholson’s offer to direct The Legend of Hell House (1973). Instead Fuest opted to direct his pet project The Final Programme (1973), an adaptation of Michael Moorcock’s science fiction novel of the same name. After persuading the backers that he could shoot the film for less than £600,000, he provided the script and designed the magnificent sets. Unfortunately it was a case of style over content. Despite being visually striking, the film is far too heavy-going to be entertaining. Too arty for commercial tastes, it did not do well at the box office but maintains a cult status.

With British film production going into decline, Fuest moved to Hollywood to direct The Devil’s Rain (1976) a rather gory and often incoherent low budget chiller notable for most of the cast melting on screen! Budgeted at $1.5 million, the 29-day shoot turned out to be such a massive strain on the director, he nearly had a nervous breakdown. Despite the solid presence of Ernest Borgnine, Ida Lupino, William Shatner and John Travolta in an early role, the film’s negative critical reaction effectively ended Fuest’s cinema career.

Robert Fuest’s ‘Aphrodite’ (1982)Fuest spent the next three years directing nondescript shows and movies for American TV. These bland efforts are far removed from the relative sophistication of Dr Phibes. He returned to England, where his TV output was little more than facsimiles of his work in the States. His final film, Aphrodite (1982) is a French soft-core sex film shot in Greece and starring Horst Buchholtz and Valerie Kaprisky. Although more interesting than any time his did on the small screen, it didn’t prompt a permanent return to cinema.

Fuest spent his retirement painting with great success. He also lectured at the London Film School. Fuest always believed that quality should come first, and his excellent work on the Dr Phibes films shows what the British horror cinema was capable of doing. Style, sophistication – and a touch of gruesome self-parody!