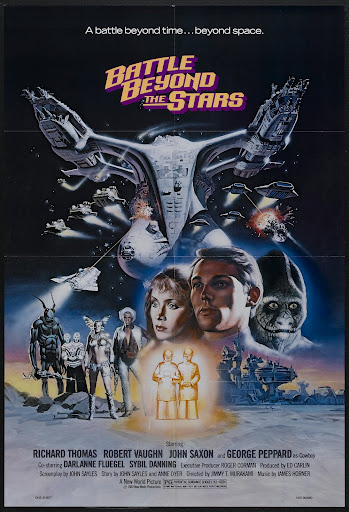 It’s tempting to say that James Cameron gives his fans that sinking feeling. After all, he recently descended to the bottom of the Marianas Trench, in a submarine of his own devising, to explore the ocean at its deepest point. And his very biggest hit – one of the most popular movies of all time – is his dramatization of the sinking of the Titanic. With a new 3-D version of Titanic now coming into theatres, it seems high time to remember where Cameron’s career began. With, of course, Roger Corman.

I never met Jim Cameron, but I’ve spent many hours with Randy Frakes, an effects specialist turned screenwriter who had been one of Cameron’s college pals. The two wangled their way onto a Corman low-rent sci fi epic, Battle Beyond the Stars (1980), by promising to build a front projection camera rig for inexpensive special effects shots. When the gizmo was finished, Roger declared himself unconvinced, but Jim rebounded into the position of model maker, then became the film’s art director, devising sets out of little more than foamcore, hot glue, gaffer’s tape, and spraypaint. He had everyone collecting Styrofoam containers from McDonald’s hamburgers: when spraypainted silver, these certainly looked impressive lining the walls of a spacecraft corridor. But if an actor happened to turn around carelessly, the whole thing would crumble. Then it was back to McDonald’s for more Big Macs.

Cameron’s ambitious sets for Battle Beyond nearly killed him, because he micromanaged every detail. Randy remembers, “He hardly ever slept for six weeks straight.” Afterwards, Jim and Randy tried pitching script ideas, but their concepts were always too grandiose for the low-budget Corman environment. Still, because Roger admired Jim’s ability to think on his feet, he was invited to direct second unit (including a “maggot rape scene”) for Galaxy of Terror, and went on to make his directing debut with Piranha II.

At New World Pictures, Jim Cameron found a career, and also something more. During the frantic pre-production days for Battle Beyond, work went on at Corman’s Venice studio nearly around the clock. One day assistant production manager Gale Anne Hurd was going over costs and schedules with Jim, the new art director, when they heard a piercing scream. It seems a crew member kneeling on the floor had stuck a matte knife in his pocket, its blade protruding. A second man had tried to step over him, but the unseen blade caught his leg, severing his femoral artery. Blood spurted dramatically; he was convinced he was going to die. Gale told me, “Jim had the presence of mind to take his shirt off, make a tourniquet, tie it, and we both drove him to the hospital.” Jim’s low-key heroics obviously caught the attention of this capable young woman. A few years later, the two were married.

As a couple they collaborated on a futuristic film of their own, The Terminator. Gale also produced such later Cameron films as Aliens and another watery epic, The Abyss. Somewhere along the line, the two deep-sixed their romantic relationship. But they remain friends, and also fans of Roger Corman. When Jim accepted his slew of Oscars for Titanic, Gale was disappointed he didn’t single out Roger in his thank-yous. Wouldn’t a talent like Cameron have succeeded without New World Pictures? As Gale insisted to me, he “wouldn’t have gotten a foot in the door, I don’t think. To go from being a guy building spaceship models to art director to second unit director in those three steps, that doesn’t happen anywhere else.

check out Beverly in Movieland http://beverlygray.blogspot.com/