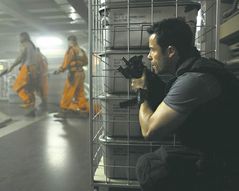 ONE can always count on European movie magnate Luc Besson to inject an international flavour into action-filled screen projects.
In Lockout, the French producer of Taken and Transporter gives us an Aussie leading man sent into space by a Swede to rescue an American woman from a pair of fiendish Scots.
The result? A derivative yet expensive copy of a cheap yet inventive all-American B-movie.
The obvious template of Lockout is John Carpenter’s Escape from New York with the unlikely choice of Australian actor Guy Pearce standing in for Snake Plissken. Pearce plays Snow, some kind of savvy intelligence operative of the future, set up to take the rap for killing a fellow agent and stealing a valuable attache case.
Caught and convicted without a trial, Snow is designated for a term in an outer space prison facility where inmates are frozen in cryogenic chambers for their sentences. Fortunately for him (but unfortunately for the world), a visit by the U.S. president’s daughter Emilie (Maggie Grace, also the damsel in distress in Taken) has initiated a mass prison breakout in the satellite-slammer. Snow is recruited to save the situation, which becomes all the more dire when an intelligent Scottish inmate named Alex (Vincent Regan) figures out who Emilie is and intends to use her as a bargaining chip to negotiate his way to Earth, if he can just keep her from the clutches of the drooling psycho (and fellow Scot) Hydell (Joseph Gilgun), the guy who initiated the breakout.
At the same time Snow attempts to keep Emilie out of harm’s way, he is also intent on finding one of the facility’s inmates who can prove his innocence.
Besson gave directors/co-screenwriters James Mather and Stephen St. Leger lots of high-tech resources that Carpenter could have only imagined when he made Escape back in 1981. There are space walks, zero-gravity fight scenes and huge digital techno-scapes.
But this is thin gruel anyway. Besson apparently opted to go for a PG-13 rating in the U.S., sacrificing toughness for fairly lightweight action.
Pearce, buffed into action hero shape, is amusing but he never quite inhabits the role. One problem: Snow is verbose and constantly cracking wise where he really should have taken a tip from Snake and stayed a man of few words.
Apparently, this movie’s true progenitor is the ill-considered 1996 sequel Escape from L.A., which saw Snake Plissken sent to the post-apocalyptic left coast to retrieve not the president but the president’s daughter, in a movie filled with cheesy special effects and hackneyed comic hijinks.
Is it possible Luc Besson, seized by the same contrarian French sensibility that saw Jerry Lewis win the Légion d’honneur, saw it and considered it the true masterpiece?
Lockout may answer that question.
randall.king@freepress.mb.ca
Other Voices
Selected excerpts from reviews of Lockout.
Cavalierly conceived, generically titled and derivatively plotted. It feels like a missed chance because Pearce and Grace came ready to play.
— Jake Coyle, Associated Press
Witty one-liners compensate for clichéd plotting and cheesy effects in this sci-fi action thriller.
— Frank Scheck, Hollywood Reporter
At a certain point, the pic’s unpretentious B-movie style, like its generic and uninformative title, seems to indicate a simple lack of ambition.
— Justin Chang, Variety
Big dumb fun is the chief objective of Lockout, so it’s a pity that this sci-fi action flick only consistently delivers on two-thirds of its promise.
— Tim Grierson, Screen International
The committee product of newbie directors James Mather, Stephen St. Leger, and producer Luc Besson, Lockout is, not unexpectedly, a potluck of derivative references.
— Nick Pinkerton, Village Voice
Lockout is a largely half-hearted effort in which some of the major set pieces are so indifferently executed that they literally look exactly like sequences out of video games.
— Glenn Kenny, MSN Movies
Lockout is the kind of manly nonsense no one wants to make anymore.
— Joshua Rothkopf, Time Out New York
Who cares about subpar computer-generated work when Guy Pearce is a one-man cartoon badass spectacle all to himself?
— Nick Schager, Slant magazine
— Compiled by Shane Minkin
Movie Review
Lockout
Starring Guy Pearce and Maggie Grace
St. Vital
14A
95 minutes
one and a half stars out of five
Republished from the Winnipeg Free Press print edition April 13, 2012 D8