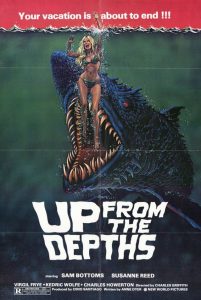 When seismic activity off the coast of Hawaii unleashes a previously trapped selection of prehistoric sea life including one very large, odd looking carnivorous fish, the locals at a sea resort subsequently find themselves on the menu in this very silly Jaws inspired poop-fest. Far more terrifying than said oceanic predator however is the God-awful troupe of actors assembled in this! Put it this way, if incompetent overacting is what floats your boat, then you’ll absolutely be in heaven with this one.

Luckily it is entirely clear that the director knew what a stinker he was involved with here and quite rightly injects much humour into proceedings (most of it sadly falling woefully flat but oh well, it’s the thought that counts after all). It would be all too easy to poke fun at the rather poor looking creature in this (which is absolutely NOTHING like that depicted on the video sleeve!) but to be fair I have seen far worse in my time………no really I have. The real problem here however is that much of the underwater footage is so dark that it is virtually impossible to discern what the hell is going on (not that one is probably missing much anyway). The ending to is handled about as lousily as humanly imaginable but after having sat through the previous eighty five or so minutes of this rather mundane effort, the viewer will be perfectly prepared for such a let down.

I wouldn’t in all seriousness recommend this to anyone other than extreme bad movie lovers…..and even then I would attach a caution. Oh well, at least it’s marginally better than Devouring Waves aka Devil Fish/Monster Shark.