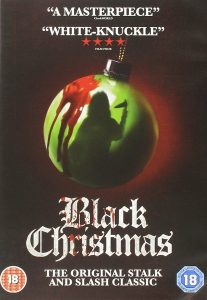 The girls of a sorority house are being tormented by a twisted prank caller who continually calls to convey increasingly vile and abusive sentiments. What at first appears to be a sick joke eventually turns violent for the girls during the season of supposed goodwill and merriment.

The original and maybe even the best, ‘Black Christmas’ set the ball rolling for the slasher genre and was the biggest influence for the phenomenally successful John Carpenter classic, ‘Halloween’ (1978), which was, in fact, originally conceived as a sequel. Although Italian director, Mario Bava, had previously created what some see as the first slasher movie, ‘Bay of Blood’ (1971), it was ‘Black Christmas’ that was to become recognised as the catalyst for one of the most lucrative sub-genres of horror cinema. Bob Clark (who previously made the kooky, enjoyable, low-budget zombie film ‘Children Shouldn’t Play With Dead Things’ (1972)), still at this point something of an amateur director, took a simple yet naturally frightening concept and turned it into one of the most unsettling and nerve-wracking one hundred minutes in cinematic history. Only a select few films such as ‘The Haunting’ (1963) and ‘Alien’ (1979) are atmospheric enough to truly equate to the eeriness and feelings of apprehension that are to be induced by ‘Black Christmas’.

The simplicity of the production is what makes it so endearing. There are no overly bloody death sequences or unlikely, comic-book style events; the viewer is just presented with an unnerving tale which could easily have a strong basis in reality. Inventive camerawork and POV shots as well as a superlative use of lighting are the elements that combine to achieve the desired results. The often pseudo-claustrophobic environment of the sorority house, from where the vast majority of events occur, offers the perfect, vulnerable and unguarded location susceptible to intrusion and thus attributes to the continual foreboding atmosphere. Clark was not afraid to take time building both the story and characterisation as well as introduce the viewer to the aspects that he would use to build the suspense. This is prepared before plunging the viewer into a seemingly uncontrolled nightmare that one experiences along with the protagonists. Another aspect that firmly stands out is the mysterious way that everything is presented; even at the very end, very little has truly been explained yet everything seems like it should have an obvious explanation. Even in its undoubted simplicity, ‘Black Christmas’ has complicated facets that require thought from the viewer to entirely comprehend the film. In some ways, the concealing of several key points puts the viewer’s knowledge of events on a par with the actual characters.

‘Black Christmas’ is also complimented wonderfully by strong acting performances from Olivia Hussey, Margot Kidder, John Saxon and a highly pleasant and amusing turn from Marian Waldman. Despite the tiny budget, this is a highly polished horror film that genuinely belongs among the elite of the genre. This is where it all started and those familiar with later slasher films such as ‘Halloween’, ‘Friday the 13th’ (1980), Slumber Party Massacre (1982) and ‘The House on Sorority Row’ (1983) should be able to spot several of the now-clichés that first materialized in ‘Black Christmas’.