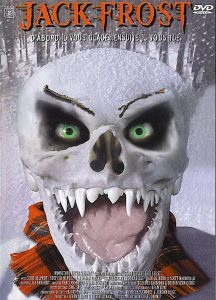 Jack Frost, no kids it’s not the warm hearted family movie about a dad who comes back from the dead in the form of a snow man. It’s about a sadistic killer named Jack Frost who is sprayed with some acid fluid and is morphed into a killer snow man. I happened to catch a copy of this movie so I could have a nice sit back and laugh at it. A killer snow man? Ha, sounds like the perfect comedy/horror movie! Well I was wrong, very wrong.

Jack Frost is about a killer who is being transported via truck to jail so he could fry in the chair at midnight. But it’s a snowy night and it collides with a government tanker carrying a new DNA fluid. Jack escapes only to be burnt to death by the acid and morphs into a killer snowman. He returns to the small town of Snowmonton where he was caught by a small time sheriff. Here he is ready to kill again, now as a snow man with cooler powers. He can condense into water, shoot out ice cycles as spears, and grow killer fangs. The only question is, who can stop Frost? This movie is below the typical B-Movie line. The movies begins cheesy but as soon as Jack is burned by the acid, it quickly drops below the cheese line and goes flat. The acting for one is appalling! Here we have a whole cast of unheard of actors who either can’t act, can act but has a pointless character, or is just here for a few extra bucks. The only good actor is Scott MacDonald who plays Jack. He looks like a young Richard Kiel combined with Frankenstein. Sadly his appearance is only reduced to three minutes and all we ever see of him is his new snow man form and his wise cracking voice. Plus his wisecracks are anything but funny. Groaning, stupid, and bad.

The plot is horrible! Throughout history there have been numerous murderers. A killer in a hockey mask, a killer with a razer glove, a chainsaw wielding moron, a rapid St. Bernard, but now we stoop to a tacky killer snow man? Oh come on! And the way the characters are introduced are terrible. For one I really wanted Jack to kill the sheriffs son, I mean giving his dad oats with Antifreeze in them so they won’t freeze? All the characters are dumb and pointless and the deaths are to cartoony. One woman in strangled with Christmas lights and has her head smashed into a decoration box and a girl is humped to death in the shower (where is the carrot in that scene eh?).

And to top of this horrible movie is the special effects. The first big special effect we have is Jack’s DNA mixing in with snow and boy is it terrible. I mean it looks like a 60’s fashion of art design, PU! Jack looks fake as well. He looks like a person covered with rubber snow man skin. All the blood and gore is cheesy and the film never takes off with greatness but instead stoops to low levels.