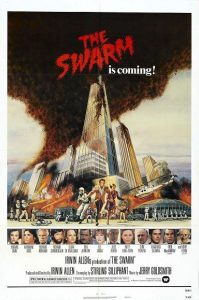 Taking its cue from previous small-scale entries like THE DEADLY BEES (1966) and TERROR OUT OF THE SKY (1978), Allen’s old-fashioned monster movie revels in the destruction of towns, trains, nuclear power plants and the reputations of numerous high-profile actors. However, Stirling Silliphant’s script is so hokey, it’s difficult to believe he wasn’t poking inglorious fun at the entire project: Michael Caine is so obviously miscast (as a ‘brilliant’ entomologist), and so clearly contemptuous of the material, his expression never changes throughout the entire film, though co-star Richard Widmark gives it everything he’s got as a gruff military type who’s eager to quell the threat by bombing everything in sight. Henry Fonda rises above the fray as a dedicated immunologist, and Slim Pickens is quietly dignified as a bereaved father, while Olivia De Havilland forms the centerpiece of a gentle romantic subplot (she’s courted by Fred MacMurray and Ben Johnson). Richard Chamberlain, Lee Grant, Jose Ferrer, Bradford Dillman and Patty Duke Astin are featured in supporting roles alongside leading lady Katharine Ross, who seems particularly embarrassed by her ridiculous dialogue (get a load of her hysterical reaction to the death of a sympathetic younger character – if you lean forward, you can almost *smell* the ham!).

The film exists in two separate versions: The 116 minute theatrical print, and an expanded ‘director’s cut’ running 155 minutes which pads the narrative with pointless dialogue exchanges, turning a tightly constructed disaster thriller into an endless yak-fest. Stick with the original.