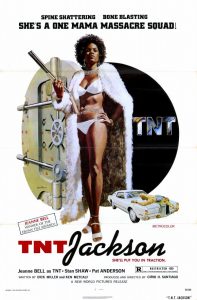 A young woman nicknamed “T.N.T.” for being virtual dynamite in a fight and a knockout in terms of looks to boot, goes to the most lawless part of Hong Kong in search of her missing brother Stag Jackson. When she learns he has been murdered, she decides she will bring the killer to justice in a fashion only she can.

Sounds good, doesn’t it. Well, there’s really nothing wrong with the basic premise as a starting base for a martial arts/blaxploitation action thriller, which is what this aims to be. The leads actually prove pretty good too with Jeanne Bell fitting nicely into the role of “T.N.T.” and Stan Shaw doing well as the ambitious, power-hungry Charlie. Where this fails miserably is in terms of the fighting action it offers up. The fight scenes are totally and completely unconvincing and/or sometimes so completely over the top it reaches the point of ridiculousness which doesn’t at all help when the basic focus of your movie is a Kung Fu action heroine. Also the poor lighting, actors sporting accents making them hard to understand, the confusing camera-work and the sometimes poor sound doesn’t help this obvious low budget effort out either any. This does deliver in one area which may delight some fans, it does offer up plenty of the T in “T & A”, in fact practically every fight scene in the film is proceeded by some type of nude scene and Jeanne Bell actually does have one extended fight scene in which she is completely topless.

In the end, this fails to be something you want to revisit because the fight scenes are so pathetically, laughingly bad.