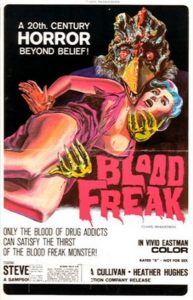 Certainly one of the strangest and most incredible films ever produced for human consumption. Mere words can not begin to describe this twisted masterpiece. The fantastic plot involves a guy named Hershel (Steve Hawkes) who rides a chopper and looks a bit like Elvis Presley. He meets up with two sisters, one an extremely straight Bible preaching evangelist named Angel who wants to save the world, the other a drug using slut, named Ann, who has the hots for Hershel. Hershel smokes some kind of super addicting pot which causes him to sc**w Ann. He then goes to work for a man who appears to be their father who owns a poultry farm with a built in laboratory run by some dim witted scientists. Hershel then eats a whole turkey provided by the lab which is laced with experimental drugs. He passes out, wakes up as turkey monster, starts killing a strange assortment of people, and drinks their blood. He also has sex with Ann in his turkey outfit while she voices her concerns about having turkey monster children. All throughout the film, a sleazy narrator interrupts things to give the audience confusing philosophical insights about God. It all works out in the end as Hershel finds sobriety, God, love, and poultry. You could spend your whole life trying to find something as bizarre as this film and not succeed.