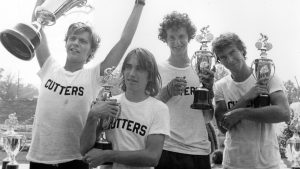 “Never be bullied into silence. Never allow yourself to be made a victim. Accept no one’s definition of your life, but define yourself.” –Tim Fields , British Anti-Bullying Activist

When I was a wee lad, I would often complain to my esteemed Mother that so and so was not playing nice with me. Frankly, I was a bit of a whiner….she would routinely come back with the same line, “If they are not being nice…then don’t play with them.” Simple, succinct, and to the point. It is a lesson that I now try to apply in both my professional and my personal life. Frankly, it’s a lesson that the motion picture exhibition industry really should take to heart. Let’s face it for probably the past decade the movies studios have been acting like neighborhood bullies intent on not interacting and conducting business in a mutually beneficial manner, but dominating every exhibitor they come in contact with. At one time these studios would work with you…but now, not a chance.

The culture of bullying has permeated the corporate culture of the studios, like the hallways of a middle school or the schoolyard, the studios have assumed the posture of corporate advancement by showing the other kids how they could push around someone who really compared to them had little or no power. The people who I remember being bullies in school ended up being bullies in later years and eventually, their behavior would create enough social push back and would be felled by the very sword that they wielded.

The problem is that if corporate bullying is accepted it spreads quickly and invades every aspect of the business. It eats at the integrity of a business ideal and erodes partnerships. I have recently read some of the comments made towards NATO by one of the heads of the major chains and frankly upon reflection, that executive in his actions betrayed himself to be a lowest form of bully. At a time when the industry is in crisis, instead of rallying his peers to the collective defense of the theatrical exhibition industry and achieving a goal of a stronger industry, this not so wise man was making statements eroding the validity and purpose of the main body for advocacy for the motion picture theatre.

In 2016 this executive called out the head of NATO for countering comments made by a FOX executive when he called the window demands of cinema owners “crazy”. The NATO head rightly defended that position. In a total breach of faith and collective good will, this exhibition executive calls out the NATO head in public and a with a show of deep bravado “dissociated his chain with the statements made by the NATO head. In doing so he fractured NATO and effectively neutered that organization at the bargaining table.

Here is the executive’s statement:

The theatrical window is a longstanding industry practice that has benefited studios, theaters and moviegoers. We all should tread lightly and be mindful that over the years, the film industry’s success is a direct result of a highly successful collaboration between film makers, distributors and exhibitors. Change should be taken only wisely. Even so, carefully considered reform is always worth evaluating in any number of areas. Accordingly, AMC is willing to work with Fox and our other studio partners to intelligently do what we can to help improve studio profitability and ensure that filmmakers continue to have the freedom to captivate moviegoers, all the while ensuring that the enormous investment by theater operators can continue to be prudently made and rewarded. This approach benefits studios, exhibitors and most importantly movie fans who delight in watching film as it was meant to be seen — on the big screen. Our aim is clear: Theaters across the continent continue to be superb guest-pleasing vehicles that incomparably showcase movie-making magic.

We wish NATO had said only that in its statement, which we saw only after its public issuance. Instead, however, NATO’s statement was condescending and gratuitous in its affronts aimed at the CEO of 21st Century Fox. The unnecessary tone of NATO’s response is not consistent with AMC’s view about how business should be conducted. In the clearest possible language, all of us at AMC have nothing but the most profound respect and appreciation for all that James Murdoch, members of his family and his colleagues at Fox have done over decades to delight moviegoers the world over. May our partnership continue in this spirit for decades to come.

It was a blatant attempt at grandstanding and frankly a herculean amount of smooching of the nether regions. It was shameless and in its execution designed to cripple the voice of NATO. I believe it achieved that, and I think it is a deep shame. It was a deliberate act intended to curry favor with the studios, pure and simple.

Most effective organizations, corporate bodies, and families as a matter of effective policy is to always keep disagreements behind closed doors. In doing so they ensure solidarity and focus at least in the eyes of outside parties.

My Father, equally as wise as my Mother, would provide me with some keys words of advice, “It never costs you anything to be gracious,” and another gem “Be fair to yourself but after that make sure you are being fair to others.”

The independents by now should have realized that there is really no future to be aligned in any way to the major theatres chains. In fact I believe it has .become a detriment. I think now is the time for the independent theatre owner to declare both their independence and at the same time their interdependence on one another. It is time to look to forming a collective body which will meet the distinct needs and the distinct future that these independent theatres represent to the future of movie going. It is time to reject the culture of bullying.

Now that the Fox has been takeover by the Mouse, this executive’s sycophantic tome may have gone to waste.

In my experience the surest way to stop a bully in their tracks is a swift punch to the gut. I have a few ideas of how to achieve this.

First of all start listening to my Mother’s advice, “If they aren’t being nice then don’t play with them.”

Have a Happy and Independent New Year.