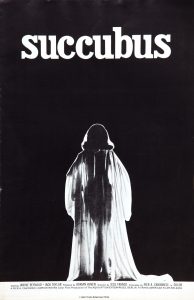 This was an early color film for Franco but he seems to have mastered the new process with relatively little problems, here utilizing a decidedly Bava-esque palette (the famous scene with the mannequins, for instance). SUCCUBUS is considered a transitional film for Franco because, from here on in, the emphasis on eroticism will become much more pronounced until it almost turns into pornography sometime during the next decade. I haven’t watched any films from the latter category but this film certainly pushes the issue as far as it was permissible at the time! Here, too, because of its dream-like nature (as was also to prove the case later with A VIRGIN AMONG THE LIVING DEAD [1971]) the film’s narrative lapses and general ‘incoherence’ are easier to accept than in, say, EUGENIE DE SADE (1970) where one does not really expect to find such liberties – though I am beginning to realize that, with Franco, virtually anything goes!

Even though he does not receive credit for writing the screenplay, it is hard to imagine that Franco had no hand in its actual conception, as the themes the film explores are certainly in keeping with the rest of his oeuvre (right from the very first scene, the sleazy nightclub act, which reappears over and over in his films). While the plot is not easy to follow (it actually pays to read about it beforehand, because otherwise it would be practically impossible to make head or tails of anything!), it copiously references noted figures from the various arts – paintings, literature, cinema, music – which apparently pre-occupied Franco during this period. Unfortunately, most of it is probably beyond the reach of most audiences (myself included) but I must say that I was very pleased to learn that Franco, through a line spoken in the film by Janine Reynaud, held Bunuel, Lang and Godard as the epitome of cinema – three film-makers whose work is unmistakably linked (Bunuel chose film as his creative métier after watching Lang’s DESTINY [1921]; Lang appears as himself in Godard’s CONTEMPT [1963]) and all of whom clearly influenced Franco in the initial phases of his career. In particular, there is a brief repeated scene where Michel Lemoine, looking straight at the camera, describes Reynaud as ‘a devil on earth’ which reminded me of a similar ‘gimmick’ used by Bunuel in THE EXTERMINATING ANGEL (1962).

The film has some very striking imagery (not least of all, the two S&M scenes that were pretty much taboo at this point) with the soft-focus and often sensual dream sequences being particular highlights; another key scene finds Reynaud and Jack Taylor going up to her castle and he recounts the tale of Faustine, a Succubus, to her. But, even in this shortened version of the film, one still has to contend with banal passages like the drugged costume party sequence and other moments where the pace drops. Also, I have a quibble regarding the film’s latter stages: why did Jack Taylor all of a sudden want to do away with the Janine Reynaud character (the irony of his unconsciously ‘hiring’ the Devil himself to do this is interesting but it remains frustratingly unexplained).

The music, as is customary for a Franco film, provides the perfect counterpoint to the onslaught of visual and narrative ideas; special care is also taken with the sound effects which are meant to illustrate Janine Reynaud’s disorientation (and, with her, the viewer’s). The casting of the main roles is appropriate as well: Reynaud may not rank among Franco’s loveliest leading ladies but it is arguable whether anyone could have essayed the part with more conviction and, in any case, her sensual body is certainly utilized to the hilt throughout; Jack Taylor is commanding enough as her shady manager/lover; Michel Lemoine makes for a mysterious and sinister Mephistophelean figure; Howard Vernon’s brief appearance is a natural, and typically professional.