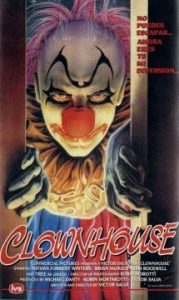 Just before Halloween, three kid brothers who are alone in a big house are menaced by three escaped mental patients who have murdered some traveling circus clowns and taken their identities.

This is the movie that kicked up the big stink of director Victor Salva (most notably known for creating and directing the Jeepers Creepers movies) molesting one of the kid actors in this movie and it’s the only reason I can think of as to why it was produced on DVD and ready to be sold but was eventually never officially made available to the public though there are are plenty of copies that have leaked out, some are bootlegs/CD-R but many are real. The best thing to do is to not let it hold you back from watching the movie.

Clownhouse is one of Salva’s earliest films. It’s obviously low-budget, it has some low-class acting though Sam Rockwell managed to break out into some kind of stardom. The acting is probably the worst part of the movie because it’s based on the three kids who are left home alone while their parents are out on business or something (I don’t remember that detail anymore). These kids do alright but, they’re kids. I don’t really enjoy watching a bunch of boring, whining kids on screen but at least my interest is peak because there are are psychotic clowns out there trying to kill the lil’ boys.

The mental patients who have escaped and dressed up as clowns are for the most part pitiful. The only clown worthy to fear is Cheezo. The really tall clown who obviously has the decent clown make-up, the other clowns look dull and stupid. Luckily enough, Cheezo gets the most screen time.

There’s not much violence at all in the film. It’s mostly implied violence but when a movie from the 80’s is based on kids, they obviously weren’t allowed to put axes in their faces and behead them (dang!). There are quite a few chase scenes, mostly boring as long as Cheezo is still around, you’re still around… maybe.

Mainly slasher fans will enjoy this one. There’s no real slashing but it’s got that 80’s slasher feel without the gore. It’s not too bad.