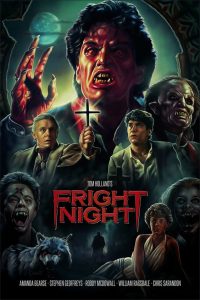 ‘Fright Night’ is a movie that has stuck with me for years. Recently I was able to get it on DVD and have been watching it and trying to convince my friends to watch it ever since. It has it’s flaws but time has been kinder, I think, to ‘Fright Night’ than it has been to either ‘Near Dark’ or ‘The Lost Boys.’

Chris Sarandon is great and charismatic in his role as the new next-door neighbor. He gives a deep performance and it seems like he’s having a lot of fun in every scene. William Ragsdale isn’t bad either as he tries with greater desperation and anxiety to convince people that the vampire exists and win allies to help him destroy it. My favourite performance comes from Roddy McDowall. Like Donald Pleasance later in his career, Roddy McDowell could reasonably be accused of acting in anything if there was a paycheck involved; this has damaged his reputation somewhat. I think ‘Fright Night’ and his performance as Peter Vincent definitely falls in the plus category rather than negative. He is great at hiding behind masks and is constantly performing for the other characters. As an actor, the part required versatility, compassion and depth. Had they been able, Peter Cushing or Vincent Price would have also played the part splendidly — McDowell’s character is of course a tribute to both these actors and I think that he was simply fantastic.

So many of the moments in ‘Fright Night’ compete to be my favourite but I think it comes in the final third of the film. Peter Vincent has run out of masks to hide behind and becomes a very tired, very frightened and very old man. Redemption isn’t out of reach — but he’s going to have to work for it.

I mentioned earlier that ‘Fright Night’ has aged fairly well. There is decent gore and make-up so anyone looking for that will likely be satisfied. Music can kill films and age them more quickly than anything else. It works here where it might fail in other films.

The strength of ‘Fright Night’ though are it’s performances and the sense of fun that it has. Definitive vampire film? No, but a lot better than many, many, many of the pretenders to that title. Rewarding, fun, and worth a look.