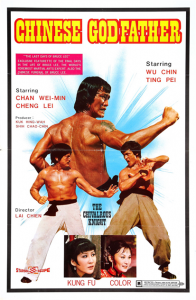 As soon as “The Chinese Godfather” begins–when a wounded fighter stumbles out from behind some bushes and groans “Uuuuuggghhhhh”–you know you’re in for a lousy viewing experience. This movie is bad, bad, bad; it’s a textbook example of the kind of sweaty, ugly, $1.95 film-making that prompted American audiences to ridicule Hong Kong cinema for years. Still, it’s grotesquely fascinating for fans of the chop-socky genre. The opening credits are hilarious: “Starring Bruce Lee’s Girlfriend TING PEI…Also Starring Super 100,000 Star CHAN WAI-MIN”…and so on. Just what *is* a Super 100,000 Star, exactly? This remains a mystery, but the film does indeed star Chan Wai-min (who, according to one of many Bruce Lee death legends, was with Lee when he was supposedly attacked and killed by Triad hit men) and Ting Pei (the actress with whom Lee was having an affair, and in whose apartment he died). The villain is portrayed by Cheng Lei, who showed up in various supporting roles in Shaw Brothers films of the late ’60s, and Wei Ping-ou (the gay translator in Lee’s “Way of the Dragon”) also makes a brief appearance. No need to describe the plot here; it’s typical kung-fu movie fare, crime and revenge. The film does distinguish itself with some brief nudity, a rarity in Hong Kong martial arts dramas. The choreography is clumsy and labored, but the final fight scene is so long–and, at the end, so brutal–that it takes on an intriguingly surreal quality. After “The Chinese Godfather” there’s a very short featurette, “The Last Days of Bruce Lee”, which shows footage of Lee’s funeral (by this time you might have noticed a theme of sorts) and in which Ting Pei–or rather, an English-speaking dubbed voice–insists that “Bruce had other female friends, too” and that the circumstances of his death were not at all suspicious. There…curious now? You should be. This is one of the genuine oddities of the golden age of home video (it was released by Media–a big dog in those bygone VHS days–in 1978, making it one of the first kung-fu films available on videotape). If you can find an old copy of “The Chinese Godfather” somewhere, snatch it up and bask in its sheer sordidness. But be forewarned: every print I’ve ever seen was blurry and washed out, and age won’t have helped the appearance of the film any.