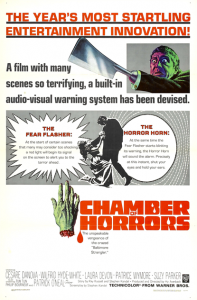 Chamber of Horrors-After escaping custody and presumed dead, a deranged madman starts a rampage of revenge against those he believed wrong him in sending him to jail, forcing a pair of wax museum attendees to help solve the case before his rampage is complete.

A somewhat decent and enjoyable film, though this one does have it’s problems. The first and most obvious one is the gimmick of the flashing red screen and siren used to indicate a potentially frightening scene, yet neither the sequence itself shows anything remotely frightening nor is the warning useful as it intrudes on the frozen frame and looks cheesy and quite fake. Onto the film itself, the biggest problem is the fact that the majority of the film is devoted to an investigation angle that’s not conducted by the police but rather his friends in the wax museum as they construct an exhibit on the madman’s rampage, which feels quite lame as well as intrusive to the pacing as there’s not a whole lot of kills to really work this one over. That said, there’s some good stuff here as the frequent trips to the wax museum give it a pretty chilly air at times, several of the stalking scenes are undertaken during a heavy fog that provides a pretty rich atmosphere during the better moments in the film and it has a fairly fun finale that certainly has it’s fair share of action. It’s enough to make it entertaining, but its held down by it’s flaws.