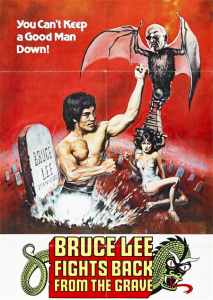 The movie opens on the tombstone of Bruce Lee, which is struck by lightening causing the dead start to bust up through the dirt. From here “Bruce Lee” (Bruce K.L. Lea) seeks revenge on his former trainer who has been killed.

Brucexploitation is a sub-genre that really took off after the death of Bruce Lee. It was clear the Martial Arts genre needed something to keep those cash registers ringing so countless producers made in-name-only Bruce Lee movies. I’m slowly making my way through them and I really hope I don’t come across one as bad as this one.

If you’re a fan of bad movies then you’ll get a couple laughs out of this sucker, which contains the typical bad dubbing and laughable sound effects. There’s no question that the greatest thing about this picture is the American title, the opening credit sequence and how the title and this sequence are pretty much the only thing that deals with “Bruce Lee fighting back from the grave.” I’m sure a zombie Bruce Lee movie with this title could have been awesome but sadly that’s not what we got.