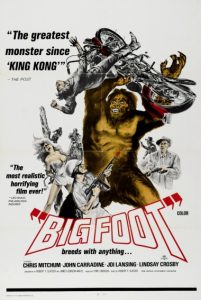 Rick wakes up and heads to the nearest town to try and find help but the local police don’t believe him and it takes two traveling salesmen who say they are interested in lending a hand. Jasper B. Hawks (John Carradine) and Elmer Briggs (John Mitchum) believe his story and think that if they can capture one of the sasquatch’s then they will be rich. The creatures have Chris tied to a stake along with another pretty woman named Joi Landis (Joi Lansing) and they figure out that Bigfoot wants to mount them and get them pregnant because a smaller and more human looking creature (Jerry Maren) keeps sniffing about. Joi is taken up the hill as a prize for the biggest Bigfoot (James Stellar) so that he can mount her but Chris, Jasper, Elmer, and the biker gang will soon be there to help.

This film is written and directed by Robert Slatzer who had directed a couple of biker flicks before but the budget for this film is so small that he couldn’t even get any cool looking motorcycles. It’s easy to pick out the silliness here and I’ll start with Carradine’s character who recites famous lines from other films like “Go away kid, you bother me”, “It was beauty did him in” and ultimately “Beauty and the Beast” as he looks up and down at the beautiful Lansing. I also couldn’t help but notice that Bigfoot knows how to tie knots! Who else tied the women up to those stakes? Lansing is a pilot but after parachuting out she takes her suit off and is wearing almost nothing and Jordan who is in the forest (nowhere near any beach) is supposed to be on a hiking trip but is wearing a bikini. How convenient for viewers! Chris Mitchum gets into a fistfight with one of the creatures and it turns out that the sasquatch can fight better than most heavyweight contenders. The local police are totally inept and when the sheriff learns that a girl has disappeared he spouts “Go on home and go to bed” while his deputy in the background is polishing the barrel of a gun like it’s a gay phallic symbol. The biker gang in this film has to be the dullest bunch of wimps I have ever seen as they wear nice looking and ironed clothes. Their hair is neatly trimmed and when Mitchum is about to head into the woods with sexy Jordan he’s warned to play nice! This gang is so timid and boring that a bunch of insurance salesmen at a convention would be more wild than these boy scouts. The motorcycles they ride are nothing more than medium sized Yamaha’s whom I think helped sponsor this film in some way. The highlight of the film aside from gawking at Jordan in her bikini is watching the beautiful and busty barefoot Lansing who when not tied to a stake is either in the clutches of Bigfoot or running around the woods trying to escape. She appears to always be on the verge of falling out of her skimpy outfit but alas, it never happens although there are several eye popping shots of her considerable cleavage. Lansing was a popular “B” movie starlet who unfortunately would die of cancer less than two years later before this film was ever released and she was stunning to look at. Both John and Christopher Mitchum are related not only to each other but to the great Robert Mitchum and along with them a few other familiar faces pop up like cowboy star Ken Maynard who has a poster of one of his old films behind him in the store. Besides Carradine the cast has Jerry Maren (Cousin Itt), Haji (Faster, Pussycat! Kill! Kill!), and character actor Doodles Weaver as the forest ranger. I’ve always found low budget efforts like this fascinating to view and along with the bad furry suits and horrible sound stage forest settings it’s still a film that knows what it is and clearly doesn’t take itself seriously.