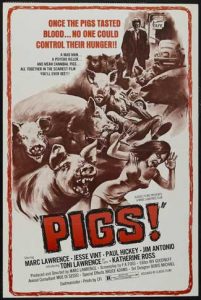 Produced & directed by legendary character actor Marc Lawrence – known for his many gangster roles – the somewhat obscure curiosity “Daddy’s Deadly Darling” (a.k.a. “Pigs” and “The 13th Pig”) is nothing if not interesting. It’s actually kind of appealing in its warped way, largely because it’s just so sincere. The dialogue (screenplay by Mr. Lawrence, billed as “F.A. Foss”) isn’t always the greatest, but it’s delivered with as much gravitas as the cast can muster. It’s well shot by Glenn Roland and features a haunting refrain and score by the consistently reliable Charles Bernstein (“A Nightmare on Elm Street” ’84, “Cujo”).

This is largely a vehicle for Marcs’ daughter Toni, a pretty and leggy young woman who stars as Lynn, a mystery lady running from something who arrives in a small California community. She takes a job as a waitress in a local cafe, working for a man named Zambrini (Mr. Lawrence), an elderly man who lived through a devastating accident when he worked for a circus. On Zambrinis’ property are a dozen pigs, and it is rumored by the locals that these pigs got used to the taste of human flesh long ago, and that Zambrini will resort to murder of drifters in order to keep these pigs fed.

Ultimately, the developments in Lawrences’ story aren’t all that surprising, but the presentation is just offbeat and atmospheric enough to make this an intriguing viewing. Ms. Lawrence does a decent job as the disturbed Lynn, and her dad is likable (for a change) as Zambrini takes a paternalistic care towards his new employee. ’70s drive-in favorite Jesse Vint is fine as the local sheriff, and there are other solid contributions by Jim Antonio, Catherine Ross, Paul Hickey, Walter Barnes, and Erik Holland.