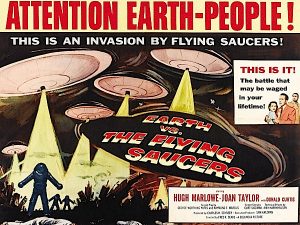 Dr Russell Marvin is working on experimental rockets launched into orbit around the earth to help with the advancement of space exploration. He has so far lost 11 rockets for unknown reasons. However on a drive with his wife they witness a flying saucer. No-one believes them but later the same saucers attack and massacre their military base leaving only them as survivors. They are told that the earth has 56 days to come quietly rather than spark a pointless war against superior forces. However Dr Marvin and his team begin work on a weapon to repel the forces.

With a title like that I didn’t need to be told I was in 1950’s B-movie `allegory for commies’ territory and all that that entails. The plot is pretty straight forward and the film wastes no time in wading into it. The meaning of the plot is a little tasteless and blatantly spells out these invaders are – `humanoids’. The thing that annoyed me was that the film ignored the fact that soldiers opened fire on the aliens first – without knowing why they were there. True they were coming to invade but the `shoot first ask questions later’ message wasn’t very palatable.

The effects are OK for the time but of course look very shaky nowadays. However it is still enjoyable and the aliens do look a little creepy despite being very stiff looking. The action is OK but I never felt tense as the 56 days counted down, and the race for the weapon seemed to happen a little too easily. The final battle in Washington is pretty cool though.

The cast are as wooden and stiff as you’d expect in a B-movie but I suppose it all adds to the feeling of the film! There are some funny lines and much of the dialogue (and effects) has been spoofed in recent films but it is still worth a watch. Overall as a film it is pretty poor, but if you’re in a mood for a bit of 50’s sci-fi hokum then this will probably deliver what you’re after.