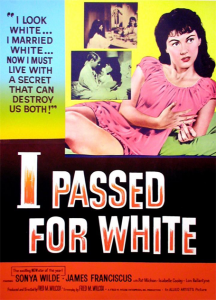 This film stars Sonya Wilde as a biracial lady and James Franciscus plays her boyfriend who has no idea she isn’t 100% lily-white. At first, Sonya doesn’t want to pose as white–but she doesn’t really fit in with black folks as she appears white. After being refused jobs and being mistreated as biracial, she meets Franciscus and lands a job–and she’s tired of not fitting in and just lets people think she’s white. After all, in America in 1960, you’d certainly be treated like a second-class citizen if you weren’t pure white–which is a stupid shame.

Once the pair marry, things are occasionally a little tough. After all, she’s told so many lies about her family and Franciscus and his parents want to meet them. Her lies are a bit hard to swallow and it’s not surprising that his mother starts to worry. After all, when the pair are going to LA on their honeymoon (where she told them her parents were), she tells him they can’t see her family….as they’ve just hopped a boat for South America and don’t plan on returning!! An additional problem develops when she slowly starts to see that her husband and his family are racists. Can this charade go on any longer–especially when she becomes pregnant? This is generally a very good and engaging film. Here and there are a few moments that seemed like they could have been handled better, but for a relatively low-budget film this can be forgiven. Well worth seeing and an interesting curio. However, I must add that the ending sure felt a bit anti-climactic.