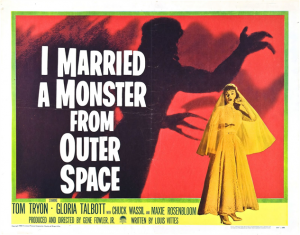 This has to definitely be one of the better science fiction films of the mid to late 1950’s. The only thing that hurts this film is the lousy title. The thing that really impressed me about it is the fact that this film isn’t a typical B-movie. In fact, this film gives you a very thought provoking story as well as what another person said, a kind of poignancy that you never would expect from this type of film. In fact, you pretty much feel that towards the end of the film that Marge is actually falling for the alien posing as her beloved Bill. Also, you pretty much feel sorry for the impostor at the end as he is beginning to experience the emotions that he never had, especially love. Unfortunately, the film is undone by its typically lousy 1950’s B-movie title. However, once you look past the title and look at how good the story is, you will see that this film is a pretty decent film.