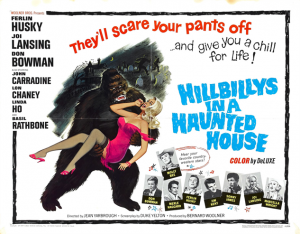 It is easy to dismiss this movie as something that belongs on the bottom half of a double bill or late night television; but I happen to enjoy it. Lon Chaney, John Carradine and Basil Rathbone together again for the first time since THE BLACK SLEEP (1956) and on far more equal terms than they were in the earlier film. Okay so they leave no cliche untouched, from the Oriental “Dragon Lady” top spy to the gorilla in a cage but there are good moments in the film too. Just watch the scene where Lon Chaney takes the secret plans away from the traitorous government worker. Lon waits for just a heartbeat before turning back into the room, pulling his gun and declaring “If you’d betray your country you’d also betray us.” and shoots the man dead. A great dramatic moment and not what you would expect from a musical comedy. Unfortunately the movie is very patronising of Southerners. Woody and Jeepers are your basic “scared of everything” backwoods boys. Boots (Joi Lansing) does not have a Southern drawl and at one point declares “Well I for one do not believe in ghosts.” making her the most level headed one in the group. As for the music, there is plenty. All Boots has to do is say “Hey Woody, sing a song.” for the plot to stop dead in its tracks so Ferlin Husky can warble another country tune. My biggest argument is that the movie goes on for another 20 minutes AFTER it should end! After the bad guys have been rounded up and the spies are in custody we get one whole REEL of country western singers performing their specialties at what is supposed to be a big Nashville Jamboree but looks like a high school auditorium. Granted this is probably the only chance many viewers will get to see old time singers like Molly Bee and Marcella Wright so just relax and enjoy the music.