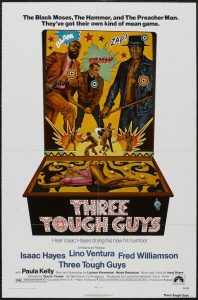 Uomini Duri aka “Three Tough Guys” is an Italian made action film from 1974. Isaac Hayes stars as Lee, a framed Chicago ex-cop who teams up with Father Charlie played by Lino Ventura. Together they fight for answers and revenge in a million dollar bank heist. Fred Williamson in a rare villain role plays Snake. This is a very entertaining film. While set in Chicago and the mob playing second fiddle to the plot, the film is very Italian. It has the feel of an Italian poliziotti film with in your face action and seedy locales. There are many veterans of Italian action films including Jess Hahn and William Berger. Lino Ventura is great as Father Charlie, the priest who can fight and does not hesitate in resorting to violence. Hayes is very underrated as an actor and its a shame he appeared in only one other seventies blaxploitation film (Truck Turner). The chemistry between Ventura and Hayes is excellent, a joining of American and Italian styles. Fred Williamson is good as Snake but his role could have been much more. He appears far too briefly and is pretty much a supporting villain in this film. Isaac Hayes scored the movie as well and the music does not disappoint! The theme “Tough Guys”, “Joe Bell”, and “Run Fay Run” (used in Kill Bill 1) are highlights on the soundtrack. Lots of shootouts and action are abound in this film but I would have appreciated a great long car chase in this film. It would have rounded out the action perfectly! All in all though a terrific film. -Note, this film is extremely hard to find as it was never released on video or DVD, worth seeking out.