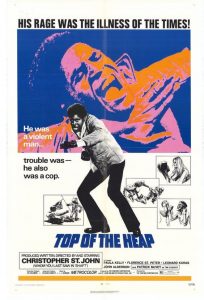 I have a feeling that Abel Ferrara may have seen this film at some point before he made “Bad Lieutenant” (much as Sam Raimi undoubtedly saw “Equinox” before he made “Evil Dead”). There are a certain number of striking similarities between the two films: cop who seems to hate the burden of his wife and family, hates his job, is corrupt, does drugs, is p****d off and scornful of just about everything around him and…well, I won’t say any more than that because I might spoil it for viewers who haven’t seen one or the other film. One big difference between the two, though, is that Christopher St. John’s character in “Top of the Heap” is rather more well-developed. He has an internal life (represented on-screen by a very odd astronaut/moon-shot fantasy/dream), so we have a certain understanding, if not necessarily a sympathy for his actions and motivations. This is a rather obscure (I’d never heard of it before I found my long-out-of-print Unicorn Video pre-record) but very underrated piece of filmmaking and it doesn’t deserve to be heaped together with other low budget blaxploitation films of the period. It’s really too bad that Christopher St. John hasn’t directed another film since. I found his work a lot more interesting than the majority of Ferrara’s.