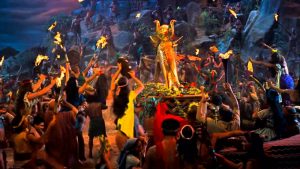 and bring the fattened calf, kill it, and let us eat and be merry
Luke 15, The New Testament

Free enterprise is a wondrous thing. It enables economies, promotes the wealth of the middle class, feeds families, and builds the idea of community.

When Government was more sensible it soon realized that in order for America to grow it must ensure that the principles of free enterprise were adhered to. That small business would be allowed unfettered access to market. Congress passed the first antitrust law, the Sherman Act, in 1890 intending the act to be in their words a “comprehensive charter of economic liberty aimed at preserving free and unfettered competition as the rule of trade.” In 1914, Congress passed two additional antitrust laws: the Federal Trade Commission Act, which created the FTC, and the Clayton Act. With some revisions, these are the three core federal antitrust laws still in effect today. But for the most part these laws are paper tigers and have not been applied since the early 80’s.

The antitrust laws attempt to prevent unlawful mergers and business practices in general terms, leaving courts to decide which ones are illegal based on the facts of each case. Courts have applied the antitrust laws to changing markets, from a time of horse and buggies to the present digital age. Yet for over 100 years, the antitrust laws have had the same basic objective: to protect the process of competition for the benefit of consumers, making sure there are strong incentives for businesses to operate efficiently, keep prices down, and keep quality up. This is now not the case.

In most countries in the world, the activities to which the movie theatres are currently being subjected to would be a violation of some form of Anti-combines law. For two hundred years, before radio announcer turned movie star turned politician, Ronald Reagan came to Washington, small business in America was booming.

All across the country, small locally owned shops were in abundance . When people needed food, they went to their local grocer, bakery, or butcher. When they wanted to fix up their home, they went to the local hardware store. Clothing, shoes, and even furniture, were manufactured by hundreds of companies all over America and were sold at retail by locally owned stores. And while customer loyalty played a huge role in the success of these mom and pop shops, they had something else to protect them, their old friend The Sherman Anti-Trust Act.

In its heyday, the Sherman Act prevented businesses from reducing competition in the market place, and the Act even required the federal government to investigate any company that was in violation of the law. The Sherman Act was the first federal law to seriously limit monopolies within the world’s most vital economy.

It was first used to great effect by Republican President Theodore Roosevelt to break up Standard Oil, and helped keep this nation’s mega zillionaires, like John D. Rockefeller and Andrew Carnegie, in check. Thanks to the Sherman Act, small businesses were given the space to grow and to to thrive, without the fear of having all their competitors bought by large corporations and thus being pushed out of the market.

Unfortunately, all that changed with Reagan.

As soon as Reagan gained power, the process of deregulation in America began. Within a few years of becoming President , Reagan’s assault on small business was in full gear as he essentially forced the government to stop enforcing the Sherman Act. Soon all manner of mergers, acquisitions, and leveraged buy-out hustlers rose to prominence, dominating the headlines through the 1980s. Small town America was laid to waste.

As a result, all across the country, large corporations took over and dominated industry after industry. Giant box stores like Walmart and Target decimated local convenience and hardware stores. The burger joint was replaced by Burger King, Wendy’s and McDonald’s. Large companies got even larger, and Main Street USA began to whither and die.

Capitalism without competition a has the tendency to produce monopolies and oligarchies, and thanks to Reagan’s refusal to maintain competition in our markets by enforcing the Sherman Act, these formed in every major industry in America, from telecom to food and even the media. To fair to Mr. Reagan, this pattern was also encouraged by the likes of Democratic Bill Clinton.

Big banks have grown out of control. Megastores like Walmart have wreaked havoc on local businesses, while telecom and cable companies like Comcast and AT&T have all of us in economic chains. The cable companies have exerted undo control. over the movie studios or in many cases acquired them. As a result their mandate is being served while the tradition of movie going is being purposefully eroded. Competition and free enterprise has been quashed and the middle class has been depleted.

Now in a move which should have theatres deeply concerned, the present administration has moved to eliminate net neutrality for this Nation’s digital networks. This paves the way for studios like Disney to have some form of exclusive relationship with the consumer, eroding the movie theatre base and eliminating any healthy competition.

MoviePass also created waves for removing 10 AMC theaters from its ticket distribution app without notifying its own customer base. This of course increased tensions with the major as it tries to negotiate a deal where it will continue to include AMC’s theaters on the app in exchange for a piece of the chain’s concession sales. AMC has publicly said it refuses to make this deal. To be frank I am not a big AMC fan….but on this issue they are right

MoviePass had about 20,000 subscribers prior to dropping their price, and that number has jumped to 600,000 since the change. However, even that is just a drop in the bucket compared to what the company now projects to gain over the next few months. The service is now expecting an additional 3.1 million subscribers by August of next year, which is 600,000 more than even they were originally projecting. This will give Movie Pass a base of 5 million subscriber, essentially becoming the largest holder of a movie going audience in North America.

Again concerns rise that they are about to dictate business terms to the movie exhibitors at a time when the exhibitors are facing intense pressures. And by in the way it is dealing with AMC. If you do not play ball with them….they will restrict your access to the movie going public. This is more than wrong and in the past it would have been met by legal action brought forward by the Department of Justice.

But something else is going on, something that I feel if not resisted could be a real death blow for theatres. What MoviePass is really doing is imposing a Virtual Customer Fee, or VCF which takes a piece of the theatres already diminishing returns. And if you don’t like ……then poof there goes your audience. Just as the shackles of the VPF come off another scheme threatens to enslave theatre owners.

I would state firmly that threatening to diminish revenue potential or demanding a percentage of revenue in return as a result of not restricting market access is at its center an illegal act. Wall Street has been allowed to grow unchecked and has become a devouring beast which holds our economy hostage as attested to by the mortgage crisis of 2008. Now the same forces of greed are threatening to plunge another sword into the heart of free enterprise by this act on theatres. It’s wrong, it’s dangerous and it’s toxic for the economy.