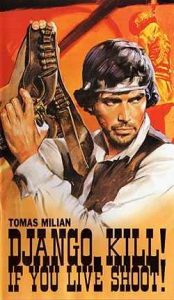 The Stranger (Tomas Milian) arrives in the town known by the local Indian tribes as “The Unhappy Place” to see the bodies of his recent partners in crime hanging in front of him. Flashbacks have already revealed that he had been betrayed and left for dead by the gang, led by Oats (Piero Lulli), following a theft of gold from the army.

The two most prominent townsfolk, Tembler (Quesada) and Hagerman (Sanz) have split the stolen gold between them, and are keeping it hidden from Sorrow (Camardiel), a larger than life bandit whose “muchachos” dress all in black and, lets say, presumably enjoy the pleasures of men. Throw into the pot the mysterious figure of Hagerman’s imprisoned wife, who beckons the Stranger from her cell window, and you have a very strange, yet apt, setting for this highly entertaining and frankly bizarre movie.

In fact, this film is straight out of horror territory, from the Stranger’s first screen appearance – clawing his way out of an open grave – until its bitter ending. The mood is ably assisted by Ivan Vandor’s score, which adds suitable suspense and tension, particularly during the scenes portraying Hagerman, his wife and her relationship with the Stranger.

The cast is quite superb, particularly Sanz in the part of the treacherous Hagerman. Milian meanwhile plays the Stranger role competently but fairly static without the mysterious charisma of a Nero or Eastwood. I am a huge fan of Milian, but much prefer to see his characters portray a little more humour (as he does so brilliantly in Face to Face and the Big Gundown, to name just two performances).

At times graphic (like the notorious scalping scene, or the sight of Oaks’ body being torn apart by the locals desperately clawing at the gold bullets within his barely alive body), at times obviously low budget (such as the scene in which the Stranger is tortured, by being subjected to blood sucking bats and other creatures), but captivating throughout. One of the “must view” euro-westerns, in my view.