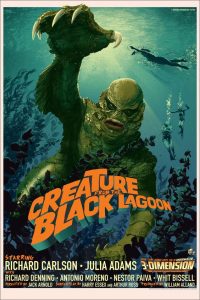 One of few truly great “creature” films, THE CREATURE FROM THE BLACK LAGOON is a surprisingly effective horror film concerning a scientific expedition up the Amazon to investigate an unusual fossil find–but instead of fossils the crew members encounter an underwater creature of considerable intelligence that is bent on their destruction.

The script is a bit dated by modern standards, but the cast (particularly Julie Adams) is effective, and the creature is easily one of Universal Studio’s most memorable creations. And seen today in standard black and white, the film is quite enjoyable. But it doesn’t hold a candle to the original 3-D format, which I was fortunate to see not once but twice during the 1970s and 1980s. Simply stated, BLACK LAGOON’s cinematography was probably the best of all 3-D movies to date. As with most 3-D films, there is plenty of “coming at you” cinematography, and many viewers will be able to pick out such moments when seeing the film in standard black and white–but in addition to these, the film used 3-D in a remarkably subtle way; virtually every scene in the film is designed for 3-D, and the effect is exceptionally memorable in the underwater sequences.

I remain disappointed that the 3-D version of BLACK LAGOON–not to mention such other 3-D films as HOUSE OF WAX, IT CAME FROM OUTER SPACE, and DIAL “M” FOR MURDER–has never been released in 3-D format on video or disk; instead, we must make do with such bottom-budget 3-D flicks as THE MASK, CAT WOMEN ON THE MOON, and the like. Admittedly, the impact of the format is lessened by the small screen and demands some careful color adjusting, and the effect requires the use of 3-D glasses–but it is a shame that we must settle for ghosts of the originals when we could easily have the originals instead