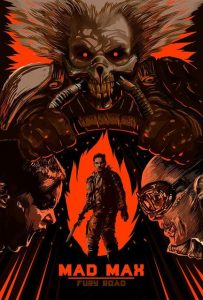 Mad Max (1979) is a low budget Aussie film that became a huge success in the U.S. because of it’s sequel Mad Max 2 a.k.a. The Road Warrior. Not only did this movie spawned a franchise but it created a new genre of film (the post apocalyptic wasteland/road film) many rip-offs and pro wrestlers inspired by the movie and it’s sequels.

Mel Gibson (in his greatest role in my opinion) stars as “Mad” Max, a cop who has seen too much while trying to enforce the law in a dying society. After clashing with the Night Rider, he incurs the wrath of his bikie buddies Toecutter and co. Toecutter has to be one of the most scuzziest and at the same time coolest bad guys. I like the way he tries to justify him and his crew’s actions. Ditto for his right-hand man Bubba. Beautiful cinematography, fast paced action and awesome stunts make this movie a winner.

I have seen both versions of the movie (the U.S. dubbed version and the original Aussie soundtrack). For full enjoyment stick to the original version because they sound like real people, not like cartoon characters or cheesy b-movie villains. A true winner.