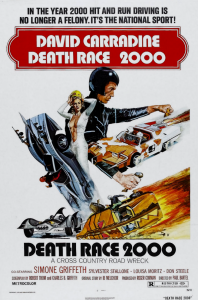 ‘Death Race 2000’, like ‘Beyond The Valley Of The Dolls’, ‘The Omega Man’, ‘Repo Man’ and ‘Rock’n’Roll High School’, is one of those dependable all time favourite trash classics that I watch regularly and never fail to get a smile out of. Anytime you’re down just put ‘Death Race 200’ on and you’re guaranteed to be cheered up! Directed by the late Paul Bartel (‘Eating Raoul’, ‘Lust In The Dust’)), co-produced by b-grade legend Roger Corman (‘Bloody Mama’, ‘House Of Usher’), and co-written by Charles Griffith (‘The Wild Angels’, ‘Little Shop Of Horrors’), this is simply one of the most enjoyable and entertaining exploitation movies of all time. The setting is the near future where a totalitarian regime keep the populace happy with a violent and extremely popular sport of hit and run car racing. The champion of the people is Frankenstein (David Carradine – ‘Boxcar Bertha’, ‘Q’) who has to race against a flamboyant group of rivals, led by his mortal enemy Machine-Gun Joe Viterbo (Sly Stallone!) who is intent on knocking him off the top. The other drivers include such cult figures as Mary Woronov (‘Chopping Mall’), Roberta Collins (‘Caged Heat’), Martin Kove (‘The Karate Kid’), Leslie McRae (‘Blood Orgy Of The She Devils’) and Fred Grandy (‘The Love Boat’). This is a rip roarin’ non-stop action-packed black comedy that is an absolute hoot! I can’t recommend this one highly enough.