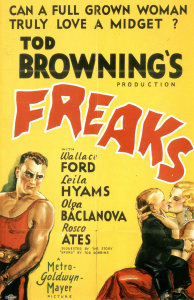 It is ironic how director Tod Browning followed up “Dracula”–a horror film with painterly set design and a distinct atmosphere of unease–with a horror film more grounded in reality. Whereas the sets in “Dracula” were as skillfully rendered as the most elaborate of tapestries, the abstraction of “Freaks” comes from the title characters, who are at once hideous, wonderful, and all too human. Browning doesn’t present these characters–who were actual sideshow performers–in an exploitative manner (though the long disclaimer that precedes the film is a definite reflection of his concern), but instead touches on a humility, modesty, and altruism that makes them as capable of expressing joy, sorrow, and vengeance as any ‘normal’ human being. And that’s the overriding moral of “Freaks,” wherein busty trapeze artist Cleopatra marries sensitive midget Hans only so she and her lunkheaded, strongman lover can make off with his inheritance. Granted, this plot has since become cliché, but to apply it to sideshow performers who are truly in their element ‘under the big top’ is something of a masterstroke…as it makes the ‘normals’ seem that much more out-of-place and unwelcome.